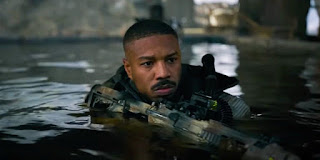 So readrs know, this tale is based on a book my Tom Clancy. He wrote 1990's "The Hunt For Red October," dircted by John McTiernan. That submarine tale was i my book a four-star movie all the way. It starred Sean Connery as Marko Ramius, a well respected Russian submarine captain who is trying to defect to the United States. It was also one of Alec Baldwin's first leading man roles.

Kelly and his wife are expecting a bundle of joy in their near future. Things take an unexpected turn when some purely evil people kill the mom in her sleep.

Also involved in the story is Jodie Turner-Smith's Karen Greer, one of the few people in the world Kelly can still trust with his life and well being. Also key to the story is Jamie Bell's soldier Robert Ritter, who one does not whether to rrust him or not. Also involved is Guy Pearce's government higher up Secretary Clay. His part is more of a wild card, since one does not know whether to trust him orr not.

I liked this talke all around, but something was not appealing in the said execution of this story. It did fine with the action and setpieces, but some key ingredient was missing in the batter.

Directing chores for "Remorse" wewre handled by Stefano Sollima, who did a great job with the action in the sequel to Sicario in 2018. It was titled "Sicario: Day of the Saldaddo".

Sollima knows when and where to place the camera for the wide array of action sequences. I hope "Without Remorse" does well enough to make further entries to this tale which intrigues from start to finish.

Jordan has been in the business 20 plus years, making his debut in the independent drama "Black and White" in 1999. His part was on no consequence, but he has turned into a terrific leading man who never plays the same part twice. Scratch that, since he reprised his role as Addonis Johnson in "Creed" in2015 and the sequel in 2018.

So readers know, Jordan will be making his directorial debut with the third chapter in the Creed legacy sometime next year.

Tom Clancy's "Without Reservations" delivers in every single department and is worth the investment of time for your daily life. One could do worse in their film selection, but this trip is worth the time.

Grade: B
Review by Ricky Miller


Posted by Dallas Movie Screenings at 10:30 AM