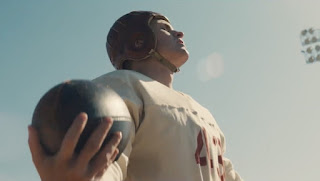 12 Mighty Orphans is a small-but-mighty film everyone needs to watch and learn.

12 Mighty Orphans takes place during the Great Depression and centers on the man named Rusty Russell who recently gave up a privileged position to coach football at an orphanage in Fort Worth, Texas. Despite the boys being orphans, Russell conceives the idea of whipping and training his young players into shape at the orphanage. As they get better with football, they soon become an inspiration to their city, the state of Texas, the entire nation of America, and to themselves.

The main actor in the film is Texas native Luke Wilson (The Royal Tenenbaums, Old School, Legally Blonde), portraying the signature role as Mr. Rusty Russell, a newly-recruited football coach for the orphanage in Fort Worth, TX. As a lead actor, Wilson is born to play the role as the football coach and has the ability to become a motivational speaker and, despite teaching sports, is also a true educator to his boys in the film. Surely, acting as a teacher or a coach can be a difficult chore to work on, but he knows he’s got some serious acting on learning how to bring inspiration that upholds him and the entire cast. Alongside, actress Vinessa Shaw (Disney’s Hocus Pocus) stands on Wilson’s side as his wife Juanita Russell. She seems concerned throughout the film but nevertheless, she’s being supportive of Wilson playing on his part. This goes to show how supportive any family member could be when it comes to being there for someone on what they need to do that is important. Shaw knows the real definition of what both sports genres and drama lie together.

Jake Austin Walker receives his meatier role as the toughest football player Hardy Brown. Of course, for a mighty sports champ, Walker seems to not understand the basics of football but once he learns to play under the careful instructions from Luke Wilson’s character, he knows how to handle this pretty well. At first, it seems tricky to be good at sports like other professional sports players, but Walker manages to get used to it for the sake of the plot and his own character.

The main director of the film is Ty Roberts who has the crew and the actors to film all the scenes in parts of Texas, including Fort Worth, given the fact that the entire setting takes place in Fort Worth. So with that, the director and the producers have made the film’s setting completely accurate for the film’s details and the building-up story chapters. Under Roberts’ direction, the plot seems to be very smooth and gentle as the setting takes place in the 1930s decade. As the film reaches the orphanage scenes, things start to crank the heat up when he guides Wilson towards his fellow orphan-turned-student characters in order to capture Wilson’s teaching drama effect for them. The director and Wilson both did an amazing job of bringing messages and very inspirational comments to better understand how to accept the losses of something people hold deeply in their hands and hearts. Lots of people can take away many things they love, but the one thing people cannot take away is one’s hopes and dreams. This is where you should watch and learn from Wilson’s lectures.

The cinematography, the editing processes, and the beautiful football scenery all bring down this lovely movie altitude as the director wanted to make this film as accurate as it was from Jim Dent’s book. Inspired by several sports movies, the filmmakers took a crack at every effort and situational ways to shoot and edit the medium football-playing shots. Even when it involves moving and tilting the camera to shoot the football scenes in the perfect angle. This may seem like a difficult process for any movie director directing a sports film, but in the end, Roberts, like other A-list movie directors, knows the basics of how to handle sporty entertainments. And lastly, for bonus points, Roberts added a few nobs of war scenes for Wilson’s character to adjust his character development for more depth and structure integrity.

12 Mighty Orphans is a fantastic movie. It clocks in exactly two hours for the film’s time length. Roberts, the producers, and the cast really did their work just right. Especially for Luke Wilson, he’s always here to bring down the guts and motivations towards his fellow colleagues, the crew, and the actors while keeping in character like he did in his previous films. I really enjoyed this film more than any other person who admires this piece of work. Looks very touching and durable to say the least. As with no flaws and no complaints on this film whatsoever, 12 Mighty Orphans is a perfect ticket for your personal, movie outing.