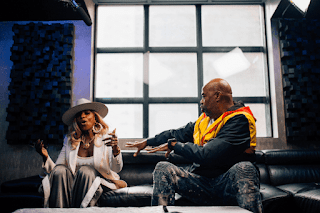 Queen of Hip-Hop Soul, Mary J. Blige released her second album, My Life, in 1994 which reached number 7 on the Billboard top 200 and number 1 on Billboard's RnB charts. The trail blazing album also was included on Rolling Stone Magazines top 500 albums of all time. Oscar-winning filmmaker Vanessa Roth follows Blige's childhood that influenced the songs that became the athem for many young women who related to the pain, sorrow and depression in her music. Mary J. Blige is widely known for influencing the marriage of Hip Hop and RnB.

Born and raised in Queens, NY housing projects, Mary was raised by her mom, a nurse with 3 other siblings. Her dad was a Vietnam War vet who suffered from PTSD, alcohol, and depression left the family a few years after she was born. Mary was molested as a child and endured sexual harrassment from her peers. She turned to alcohol and drugs to escape then dropped out of school in her junior year. Wanting to persue music, she recorded a song at a mall recording store. Her mother gave it to her boyfriend who knew someone at Uptown Records. She was signed as a background singer as the first and only female artist on the label. And the rest is, as they say, history.

Mary and Sean Combs served as executive producers of the film, and Quincy Jones was the executive music producer. Combs was the early producer for her first album What's the 411? which cemented her image of a tough and streetwise woman of the projects. The documentary features commentary from celebrities Alicia Keys and Taraji P. Henson as well as footage from the 25th anniversary concert for My Life. The joy and emotional response of the audience are voiced in the meet and greet moments with her fans. Mary J. Blige has credited the realization of how her music has affected her fans with helping her pull through her darkest moments. Blige was suffering from clinical depression as she was recording My Life. She doesn't shy away from her abusive relationships, booze and drugs. She is a work in progress and puts it all on the table.

There has been recent biopics featuring women artists like Aretha and Pink revealing their struggles in the industry that is notoriously male dominated. As our collective society comes to grips with the inequalities women must face in the stuggle of survival, the stories of those who have succeeded despite the bruises and scars is an inspiration to all women, young and old. Music is the universal language. Blige was able to tap her experience and insecurities into narratives that spoke to young women who also faced those same obstecles. They would sing along at her concerts embracing and sharing their pains, fear and ultimately their love for Mary who put her life out there so raw and unflinching.