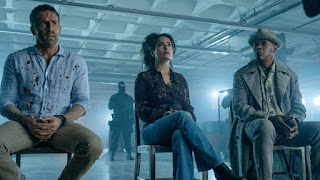 Don’t rain on your parade with Hitman’s Wife’s Bodyguard!

This year is going to be a blast with all the summer action-packed blockbusters coming to the theaters near you after multiple delays since the pandemic. Pretty seems that this sequel is going to be as epic and exciting as ever because of Ryan Reynolds and Samuel L. Jackson. However, my main question is will this sequel ever be going to outwit the original. We’ll just wait and see how well this goes. Director Patick Hughes returns to his director chair to helm this latest installment of The Hitman’s Bodyguard series, featuring the returning stars of Reynolds, Jackson, and Salma Hayek.

As the plot follows, Hitman’s Wife’s Bodyguard focuses on the hired-bodyguard Michael Bryce who continues to maintain a friendship with hitman Darius Kincaid. Though the main problem for Bryce is that he is taking a mandatory leave of absence, requiring him not to use any lethal weapons in any case. Currently unlicensed and under scrutiny, Bryce, in addition, is also forced into action by Darius's volatile wife Sonia. Soon, all three learn that a madman has conceived a sinister plot that threatens to leave Europe in total chaos.

Ryan Reynolds (Deadpool) reprises his role as bodyguard Michael Bryce while Samuel L. Jackson (Pulp Fiction) reprises his role as hit man Darius Kincaid. Both actors seemed excited as they both enjoyed working with each other as well as providing some BFF moments throughout this film like the first. Their acting style does give some decent thumbnails and similarities from any film that was directed by either Christopher Nolan or Quentin Tarantino. Surely, these guys believed that working in this sequel seems hard, but they both know that it’s a simple movie with lots of good or villainy characters being the center of attention which is something they should understand and explore based on their movie qualities and flaws they have to their limits.

Salma Hayek (2002’s Frida) steals the show in the film with her meatier role she has received as Sonia Kincaid, Darius' wife, giving an exciting chemistry with Reynolds and Jackson that really puts more bonus points into action. She seems very good at performing stunts based on her acting resume as her ways of acting in the film really gives the extraordinary buckets of thrills and chills to my ways of viewing for that matter. Of course, portraying a wife leading a dangerous style can be a tricky task, she is able to pull it off nicely in a smoother, sardonic tone as a sexy, but violent character, which is the main reason one should understand why the movie is titled this way.

The returning director is Patrick Hughes who decides to work on this film, picking up where the original film has left off. The sequel is written by Tom O'Connor along with Brandon and Phillip Murphy. As director, Hughes’ pacing is all over the place when trying to find a decent storytelling for those three characters in the film. Thanks to his ways of helming, the cinematography, the action sequences, and some newer characters are great just to keep the excitement going. He is trying to do his best with confidence to produce a lot of action and commotions for his audience.

With the film being easier to watch and enjoy, parts of the story and screenplay really threw me off. The weakened characters don’t seem very threatened and really meant it on their character personas. The editing is chaotic and cheezy with more explosions and overusing some comedic moments that really backfire on how great this action flick could or may be. And lastly and frankly, there are some poor and predictable plot twists flowing around as both the character depth and background fall flatter than ever.

Also featured in the movie are newcomers Frank Grillo (Captain America: The Winter Soldier), Antonio Baderas (Pain and Glory, Puss in Boots), and Morgan Freeman (Million Dollar Baby). All three portrayed their roles as Bobby O’Neill, Aristotle Papadopolous, and Senior respectively. And lastly, English actors who return for the sequel are Gary Oldman (Darkest Hour) and Richard E. Grant (Can You Ever Forgive Me?), reprising their roles as Vladislav Dukhovic and Mr. Seifert.

Hitman’s Wife’s Bodyguard wasn’t a good movie, maybe putting this on the average town. Though, I do admire and respect the high-level acting performances from Reynolds, Jackson, and Hayek. They make a great trio in the film (and to the franchise as a whole), but the story in this piece seems to be a bit off and is too muddled up for a decent amount of entertainment trying to find a great storyline to see what happens after the ending of the original film. I’m not saying it’s entirely bad or good, it isn't as thoughtful as it should be. I would rather go back and watch the original just a bit more than this sequel.