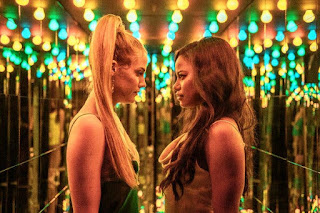 This film is heavily based on a viral Twitter thread taken by the actual Aziah "Zola'' King and the resulting Rolling Stone news article "Zola Tells All: The Real Story Behind the Greatest Stripper Saga Ever Tweeted,” written by reporter David Kushner. Having been written by Jeremy O’Harris, Zola is directed by Janicza Bravo and stars Taylour Paige and Riley Keough in their main leading roles.

Zola centers on a female restaurant worker named Aziah "Zola'' King who meets a sex worker named Stefani, also a restauarant employee. Later, after they immediately become friends, Stefani invites Zola on a cross-country road trip to Florida, where their main goal is to make as much money as possible at the Florida strip clubs.

Actress and dancer Taylour Paige (Ma Rainey’s Black Bottom) plays the main, meatier role as Aziah "Zola'' King, a restaurant employee and a strip-club pole dancer while actress Riley Keough (Mad Max: Fury Road) stands in by Paige’s side as Stefani, a restaurant employee who befriends Zola and persuades her to join in the road-trip with her. Paige and Keough both know that they are new to each other when it comes to movie acting and getting involved in buddy-heist films, but their competent chemistry begins to grow as if they got themselves flat and high-tailed like the ironic, comedic duo of Steve Martin and John Candy from Planes, Trains, and Automobiles. For the moment, Paige seems hesitant on working on such movies with tolerable nudity but she decides to just go with the flow.

Actor Nicholas Braun (HBO’s Succession) joins the road trip as Stefani’s dim-witted boyfriend Derrek. He seems nervous and anxious to take the part but he knows what to do as an ordinary person who keeps the girls company and occupied on screen and on camera. He serves as some sort of a comic-relief, bringing some hilarious performances which is something any female-lead movie should do and must have.

The main director is Janicza Bravo who is an experienced short film director and television director. She has directed her first feature film called Lemon, featuring Brett Gelman, Michael Cera, and Judy Greer and was released in 2017. The film was originally going to be directed by James Franco but got shelved due to allegations of sexual misconduct towards Franco, so Bravo had to fill in his shoes. With Bravo's direction, the story and the atmosphere really bring out some colorful examples of several films featuring women characters providing stronger, deeper messages about female power sexual harassment, and sexual misconduct.

This movie is more of a biographical-drama film rather than just a comedy-heist. Bravo has the bright idea for the cast and crew how to craft a feature compared to Promising Young Woman, giving the two female actresses much character development, huge dynamics about friendship, and some advice on how they live their daily lives and fulfilling their purpose. Viewers should be warned that this film contains strong nudity and strong language, so if you’re planning on seeing this movie, better take proper precautions and take your children to another room or elsewhere.

I hate to admit, this film is really hard to watch but Zola is pretty alright, maybe decent to say the least. Surprisingly, this film is about 85 minutes long, which is strangely shorter than any female-drama films. It’s funny but it isn’t as enjoyable as it seems to be. Though, the cast did a great job in the film, mostly for Paige and Keough’s performances. I do give respect to the director for the tremendous amounts of hard work she has put for herself, the actors, and the crew. If you want to watch this go for it, but if not, you can skip this.