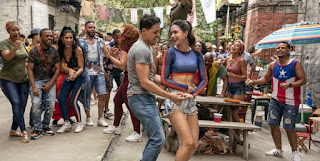 In the Heights is a colorful, musical adventure the fans will never forget.

Summertime is fun-time for those who are ready for something very exciting to happen. This musical tale becomes an anticipated journey that takes the fans and audiences to the magical world of multiculturalism of the arts. Directed by Jon M. Chu, the film is heavily based on the stage musical of the same name created by Quiara Alegría Hudes and Lin-Manuel Miranda and consists the musical stars of Anthony Ramos, Corey Hawkins, Leslie Grace, Melissa Barrera, Olga Merediz, Daphne Rubin-Vega, Gregory Diaz IV, and Jimmy Smits.

In the Heights follows the exact same plot as the musical performance and takes place through the streets and scents of a cafecito caliente that flows the air just outside of the 181st Street Subway Stop where the likeable bodega owner named Usnavi is saving lots of money from his daily grind in hopes of having a better life, maybe the greatest than he could ever imagined, even as means through singing.

Broadway actor Anthony Ramos portrays (and possibly reprising) his main role as Usnavi de la Vega, having been done so in the Broadway version of that same name back in 2018 thanks to his theatrical-musical playing experience. Ramos took every effort and every soul to put up a good acting performance and lead the audience with some stronger character-developing arcs for this film. He, as a leading actor, looks like he doesn’t need much guidance from the director and producers to understand the hardest obstacles but he really knows the pros and cons of acting in a film and Broadway production as he easily follows his character parts really well and knows the trick up in his sleeves.

The director here in the film is Jon M. Chu, who has recently helmed his critically-acclaimed film Crazy Rich Asians. When it all comes down to plot devices, Chu utilizes his energy and his fun-filled directing professionalism to bring down the energy and excitingful wisdom to the actors and musical crews in this family-friendly musical adaptation (despite being given a PG-13 rating). His ways of handling a musical production can be quite tedious for the task but he knows he can’t let Lin-Manuel Miranda’s fans down while providing such beautiful singing-and-dancing cinematography and brighter messages dealing with social-justice that affect the entire nation, the people, and the film.

Another surprise in the film that came with the twist is Lin-Manuel Miranda (Hamilton) who makes his small, but important key role as Mr. Piraguero, the man who competes against Mister Softee. If anyone asks, he’s the guy who played Usnavi de la Vega in the original Broadway production. He also serves as one of the producers for the film as part of his commitment of seeing his musical production being taken to fresh, cinematic technique intakes.

In the Heights is an outstanding musical film. It clocks in at around 143 minutes, but that’s a signature time strength like several musical films (not counting Disney) like La La Land, The Sound of Music, Chitty Chitty Bang Bang, and other ones you listed. With the musical numbers excelling to greater heights and depths, this so-called musical film is more than just a film itself, it’s a musical and a movie at the same time with the exact same pace for the music theater’s artistry and atmosphere. If you love Miranda’s works so much, you should really, really come and see this film. And I’m not joking this time, it’s a summer movie you should never miss out on. Even though you’re not a musical fan, this film is deeply a must regardless of your likes and dislikes.

Email ThisBlogThis!Share to TwitterShare to FacebookShare to Pinterest
Labels: Henry Pham, In the Heights review