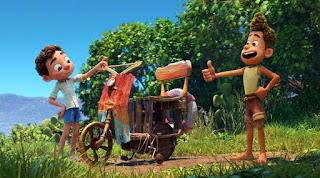 You know, it’s a crime against nature to release films at home instead of in movie theaters. That’s not a movie when it’s not released in theaters. Luca is a one-word titled film that really hit me so hard and got stuck in my head during my battles of severe depression. Usually, Pixar films are what really cure people’s depression as well as making people sob into tears when it comes to embracing newer friends, families, and, of course, life. What can be more lovable and fun-filled for the summertime is spending time with the people we love. This film is directed by Enrico Casarosa and features the ensemble voice cast of Jacob Tremblay, Jack Dylan Grazer, Emma Berman, Marco Barricelli, Saverio Raimondo, Maya Rudolph, and Jim Gaffigan.

Luca centers on two young boys, Luca and Alberto, who dream of spending their day and life in the city of Portorosso in Italy as they ever imagined and wished for. Their dream nearly comes true until the biggest problem that threatens their fun and their well-being is that they are actually sea monsters living on the surface below the ocean in the human world.

American actor Jacob Tremblay supplies the voice of the titular character Luca, a human-but-actual-sea-monster in the film while Jack Dylan Grazer voices Luca’s sea monster best friend Alberto. The two actors have brought some real, but underdeveloped chemistry as best friends throughout the film compared to the studios’ main duos, such as Woody and Buzz, Lighting McQueen and Mater, Joe Gardener and 22, and other animated duos in the prestigious Pixar Cinematic Universe. Tremblay and Grazer all started out energetically given the fact the sea monsters are voiced by American actors while most of the characters setting and living in Italy are voiced by Italian actors. This new, original Pixar film is Enrico Casarosa’s directorial debut in his lifetime for the studio, though he did direct his own Pixar short, La Luna, which was shown in front of Pixar’s Brave, featuring Kelly Macdonald. As director, the story Casarosa has retooled has drawn some inspirations based on his childhood experiences while living in Italy to helm the film and its animation scenes in the real-life, basic location called the Italian Riviera. He and his crew of animators draw the line on every location, the sea, and the characters pretty well and accurately to respect all things Italian-related and for Casarosa himself.

The animation, the story, and the designs realistically capture this enduring, animated scenery, inspired by the Italian artists from history, Italian filmmakers, and mostly hand-drawn animated films. In addition, the film is heavily inspired from Hayao Miyazaki’s directed films due to its hand-crafty CGI measurements, the drawings, and the similarities on the production designs and the heartwarming messages about friendship. As a professional filmmaker, animator, and storyteller altogether, Casarosa really knows how to find his voice scattering all over the place for families and children of all ages, mixing a unique blend of styles throughout real-life events and dream sequences, which are pretty stellar. However, the mixture ended up less disappointing to the film’s narrative structure and character development. Despite this, the music compositions coming from Dan Romer sounded miraculous. Originally in the production line, Casarosa wanted to have Ennio Morricone as main composer but died before he was asked to provide the compositions for this film.

The other three actors mentioned in my introduction consist of Italian actors Emma Berman, Marco Barricelli, and Saverio Raimondo, which is very interesting to see given the fact that the film mainly takes place somewhere in Italy. Berman voices Giulia in the film while Marco Barrcelli voices Guilia’s father. Raimondo voices Ercole, the town’s bully and the main antagonist to Luca and Alberto. On the other side, the other two American actors Maya Rudolph and Jim Gaffigan are also featured in the film, they voiced Luca’s sea monstrous parents respectively. Though, what’s extremely disappointing is that Pixar’s mainstay John Ratzenberger is seen absent in the film, thus breaking the studio’s tradition of not including him in the picture, not even a cameo for that matter.

Overall, Luca is a gorgeous movie, clocking in at 96 minutes. The director, the cast, and the animation crew really know how to make a beautiful movie, but it may not be up to par like Toy Story, Coco, or Soul. I felt like Luca is Pixar’s own Hayao Miyazaki movie. This film really captures its moments and really outshines any animated film or ordinary film released in the summertime. Regardless of the ups and downs, Pixar never fails to impress. Though, I am very saddened that this film is going to skip the theaters due to the ongoing pandemic but hopefully for the next Pixar film, it’s going to be back on the big screen again. The film is up on Disney+ now.

Bonus points for the old-school 1940s/50s Italian music playing in the Disney logo.