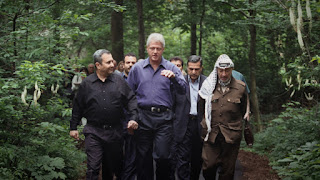 The Human Factor is American-Israeli documentary film that takes the audiences through the behind-the-scenes of the United States' 30-year effort to secure peace in the Middle East that has been recounted from the unique perspective of the American mediators on the frontlines.

Just letting the viewers know that this film is not meant for kids as this feature film contains footage about bloody violence and anything offensive towards Israeli individuals. The director of this documentary film is Dror Moreh, who is a Israeli filmmaker and cinematographer. His credits include his film The Gatekeepers, for which he was nominated for Oscar for Best Documentary Feature film in 2012, and Beitar Provence as cinematography. His directorial-debut is Sharon, which was also a documentary film that focuses on the Israeli prime minister Ariel Sharon and was produced back in 2007.

At the first glance, The Human Factor would seem that this intriguing tale would be historical-friendly and well-educated, but under the hands of Dror Moreh himself, all bets are off. What started off as a nice scholarly interview from an historian before going through each of the footage being showcased before hopping to another person who gets interviewed to share the peace-making cases. Throughout the film, it also includes Bill Clinton’s cases as part of the whole scenery.

The film had extensive usages of archive footage about the peace processes in the Middle East and interviews from historians and scholars who explain their experiences with that process at certain locations, mainly the White House. Moreh handled all the organizations on interviews, news presses, and historial Middle East events to be put into one showcasing feature. Moreh also installs some darker images on these footages on some scenes to capture this turning point about the peace “process-making treaty” being given from the U.S. politicians, including the President. On the upscale, the director knows the books he has read through and knowledge he has taken action from based on his studies about the relationship between Israeli and the United States.

Despite the darker tones present in the film, every footage and interviews give a fluid and some dynamic turns, especially historians shown in the film as they want to share their answers and acknowledgements based on their witnesses on these particular events and their ways of reviewing the footage. Not only do they love sharing their stories, but they just want to have something to talk about for the credibility of the work they (the interviewing historians) put effort through time and space.

The Human Factor is an interesting 108-minute documentary feature, and yes, that seems pretty long for its time length but there’s a lot more to see and discover when it all comes down to educational films. This film is a must once it was released on digital if you’re studying history about the Middle East and taking history classes at schools and colleges. I highly recommend this to social studies teachers as well, no joke. I hope you learn something from this film when you get the chance to watch it, which is the main reason why I decided to see this film.