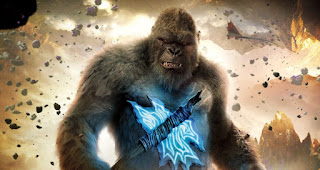 This is what going to the movies should be about. As part of its wotld of monsters and aliens universe, here dubbed the Monsterverse. The two titans oif the planet, Godzilla and King Kong square off against each other.

Of course, the audience would not be here if it wasn't for our pesky humans driving the plot along. Even Bradley Whitford's Dr. Dr. Rick Stanton commented on our planet containing a "hollow Earth," something that actually turns out to be true. That is only a portion of what happens here, so that is my spolier allotment for the week. Whitford, however does not make an appearene in "Kong vs. Godzilla," since his part was just subjected to the last part of the story in that 2019 entry that was "Godzilla: King of the Monsters." Also returning to this spectacle are Kyle Chandler and Millie bobby Brown. The pair are part of the father daughter duo that aided Godzilla the big green guy in "Godzilla: King of the Monsters" in 2019.

New to their team is also Julian Denison's Josh Valentine who is part of team "Godzilla."

This time, however, the additional measures of King Kong are thrown into the mix. Like the unexpected idea of good guys going gainst ech other with Ben Affleck's Batman squaring off against Henry Cavill's Superman, the notions in "Batman v. Superman: Dawn of Justice" (2017) and logic are tossed out the window completely.

With Recca Hall's primatologist, Ilene Andrews and Alexander Skarsgård's Nathan Lind who are on King Kong's side to keep the giant ape alive and in good health. Kaylee Hottle is Jia, an orphaned girl who speaks via sign language. That is the way she interacts with Kong as well.

Kong has been living on Skull Island for many a year and does not like the fact that has been retrofited to study his behavior and evertthing else in his life. Even he acknowledges the way in which the scientists observe him via broken down expensive exipment that has intruded is life.

He faces the big green guy a couple of times here, but that is irrelevant since the pair do not really need to desttroy eaach other in order to survive. Viewers need to realize that King Kong has been around for many years. Just go back to "Kong: Skull Island" since it was set i the tail end of the Vietnam conflict in the late 1960s.

I think Wingard shot for the big screen and it shows in the depth and angle for most of his shots.

Part of the subplot involves the man made "Mechagodzilla," which runs on multibillainre technology that involves the two beasts teaming up to dismantle the new adversary. All in all, "Godzilla vs. Kong does what its supposed to do and give fans a fun time at the movie. I had high expectations for this movie, and it delivered in virtually every single department. The pacing is never really slow, save for a couple of necessary storyline set ups. I'm old school, and I actually want this in my blu ray collection.

So readers know, if you have a subscriptio to HBO or Cinemax, ot is currently sctreaming for free on HBOMax.