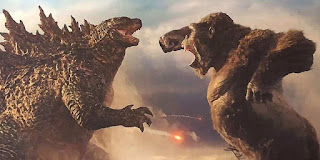 Godzilla vs. Kong unites in one, big epic feature!

This film looks very stirring and exhilarating to see as this is a whimsical way to start 2021 with a bang. Godzilla vs. Kong is the fourth film in Legendary Pictures’ “MonsterVerse” and the fourth Godzilla film produced in Hollywood. Regardless of the excitement, the film remains questionable whether it will be a success and will it survive from the ashes of COVID to prevent this from being a flop. Director Adam Wingard takes the stage as director, with actors Alexander Skarsgård, Millie Bobby Brown, Rebecca Hall, and Brian Tyree Henry carrying the film entirely.

Gozilla vs. Kong centers on two of the greatest fighting icons, the fearsome Godzilla and the mighty Kong, as Kong clashes with Godzilla with humanity being caught during the humans’ mission to retrieve the energy source into this world called the “Hollow Earth.” As the two monsters meet, they need to embrace each other to ensure their survival.

With the direction coming from Adam Wingard, known for directing Death Note in 2017, the story and his direction really seem fitting to see these two iconic titans of the east and west whom they face off against each other at some point, having previously done so in 1962's King Kong vs. Godzilla, directed by Ishirō Honda, with special effects being provided by Eiji Tsuburaya. And now, this year, the world has a brand new reimagining tale of such a brutal rivalry, complete with better, yet improvable special effects and a huge, realistic destruction galore to that affair. Speaking of special effects, Wingard and his team have done an amazing job of keeping the tedious hard work being splattered all around on the two monsters and the action sequences.

Aside from the story and Wingard’s direction itself, in addition to this, the film also touches on the mythology of these real (but animatronic) monsters (known as "Kaiju" in Japanese), with particular focus being placed on Kong and his origins. Godzilla, on the other hand, also shares some screen time under the presences of the director and the producers in order to keep the film for its title. Wingard nails the focal character development of the two like the previous Godzilla films dated back in 1950s to recent years and the King Kong films as he and his team took major influences of these films and have the commitment to watch every film from both franchises and media properties in order to capture the right consistency and pop culture accuracies for this film.

While Godzilla vs. Kong is filled with enthusiasm, the only downsides there are in the film are weakened main “human” characters being given in the film as well as using humans as leads as opposed to what the title says. These characters looked like they saw nothing and couldn’t do much more to help the monsters out, but the actors Alexander Skarsgård, Millie Bobby Brown, Rebecca Hall, and Brian Tyree Henry sounded like are trying their best and hardest to make this film easier to enjoy and to follow when it comes to storytelling and acting in [giant] monster movies.

As far as giant monster movies go, Godzilla vs. Kong is ok, but does a serviceable job for this lovely two-hour entertainment the director and the cast brought. Filled with frequent action-packed sequences and great usage of special effects, it's a mind-blowing game and numbingly simplistic but I couldn’t care less. At this point of time, I’m not entirely sure whether there'll be more films in this so-called "MonsterVerse" but I do see the potential the franchise is trying to keep up as long as the demand is there.