Stay Out of the Attic 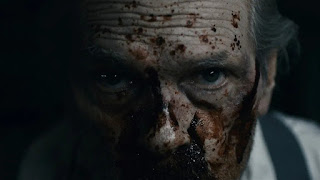 “Stay Out of the Attic,” also known as “Stay Out of the F**king Attic” according to IMDb (I’m not sure if this is meant to be stylized or if the stars are included to prevent profanity from being in the title), is not only badly titled but a bad movie, in general. Directed by Jerren Lauder, who co-wrote the script alongside Jason Scott Goldberg and Jesse Federman, “Stay Out of the Attic” starts out promisingly enough but ultimately offers little reason to stay the course of the movie.

The story centers around three ex-cons who now work as movers. Their latest job focuses on moving a man, Vern Mueller (Michael Flynn), out of his rather large home. The job turns out to be much bigger than the boss/owner Schillinger (Ryan Francis) expects. When voicing his concerns on completing the job done in a single day, Mueller offers a handsome bonus prompting Schillinger and his co-workers, Imani (Morgan Alexandria) and Carlos (Bryce Fernelius), to agree to pulling an all-nighter to complete the job. Mueller offers a single instruction to the movers – stay out of the attic and the basement.

There’s plenty of cheap jump scares thrown in throughout the film’s first half, an abrasive, jarring remainder that yes, we are watching a horror movie. They don’t help to set the atmosphere, and they definitely don’t offer much in the way of terrifying imagery. Unless, of course, you find the sight of fingers frightening.

The trio eventually come to discover that Mueller is a Nazi doctor. Following this discovery, Schillinger, Imani, and Carlos are locked into the house by Mueller. It’s a rather dumb plot development, especially considering the protagonists don’t do much to try to escape. These morons don’t even try to break out the windows. You might have more fun with this one if you’re able to overlook this idiocy.

As it turns out (and as I’ve already hinted), there’s nothing threatening in the attic – but the basement is another story. I guess the filmmakers didn’t want to have their movie confused for a remake of 1973’s “Don’t Look in the Basement” or an adaptation of R.L. Stine’s Goosebumps book “Stay Out of the Basement.” Mueller’s laboratory is housed in the basement, complete with a surveillance system he uses to track the movements of the people working above him. In addition, the lab is home to his human experiment, which he unleashes on the movers after they discover his true identity.

To be honest, Lauder’s movie does have a good set-up. It’s just not a fully realized movie, and this isn’t just due to its small budget. The presented themes of the film aren’t fully explored, and the movie isn’t even fun on a basic, exploitative level.

Gore-hungry horror fans may find some things to like with this movie. There are some body-horror elements and the film’s final moments are fairly graphic. Still, that might not be enough to persuade many to sit through this movie’s scant 80-minute runtime. “Stay Out of the Attic” isn’t particularly thrilling or terrifying, and it certainly isn’t a “fun” horror movie. On a more positive note, it does manage to avoid being a complete and total bore. Still, I’d say avoid this one unless you’re desperate for something to watch.
(Review by Bret Oswald)

Email ThisBlogThis!Share to TwitterShare to FacebookShare to Pinterest
Labels: Bret Oswald, Stay Out of the Attic review