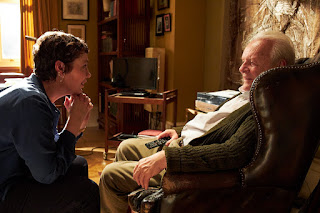 The Father tops it all for Anthony Hopkins!

Anthony Hopkins is easily one of the greatest actor of all times, from his honorable portrayal in The Silence of the Lambs to becoming Thor’s father Odin in MCU’s Thor series to his latest nominated role in The Father as he slowly slides into the horror of this father as he loses his mind witnessed primarily through his caregiving daughter portrayed by the brilliant Olivia Colman. This film serves as directorial debut for Florian Zeller, who has turned his written play Le Père (The Father) into a nice, grand entry to the motion picture industries.

The Father follows the story of an aging man who refuses all the assistance his daughter has given as he ages. As he tries to make sense of his changing circumstances, he begins to doubt his loved ones, his own mind, and even the fabric of his reality.

Anthony Hopkins portrays Anthony, the main protagonist of the film, who suffered Alzheimer's disease who moves into his daughter’s house while Olivia Colman portrays his caring daughter Anne. The film also includes the rest, but a much smaller cast consisting of Mark Gatiss, Imogen Poots, Rufus Sewell, and Olivia Williams.

Zeller’s direction takes on the high-note when it comes to coming-of-age drama films, he and the crew filmed on every stage and action as the way he wanted from his play on stage. Zeller provides some conveying messages about the living with Alzhemier’s disease and dementia, which these two are the whole, main point of what is going on in the film and what are the problems in the story that the cast and crew take note in this particular situation. The story has somewhat a sticky situation scenario but when it all comes down, Zeller perfectly captures the real-deal family crisis between a normal family member and a family member with a disease/disability.

The chemistry between Hopkins and Colman brings the significant amount of family dynamics between Hopkins and Colman just as the director really need, giving the sternly father-and-daughter relationship as part of the film’s climax, even with the opera music is being placed in the background to give the film a much deeper tone for a fatherly emotion living in a England-home lifestyle. One thing noticeable is that playing a father and a daughter seems hard for both Hopkins and Colman, but they knew what to do as their onscreen relationship really gave a lot of perception for critics and audiences who need to put themselves in Hopkins’ shoes.

I can’t tell you more from this but The Father is an amazing film, being carried by Zeller, Hopkins and Colman. This movie is highly well-told coming from Hopkins' perspective, as he ages his memory fades and things get more complicated than it seems. This movie is emotionally powerful, beautiful, and depressing to watch. It makes me think about the films featuring any old man and his daughter's relationship. While the point of this movie is to bore or confuse us, I got a little lost in the film as I felt like it needed a little more explanation of what was really going on truthfully. Nevertheless, the performances and the story are fantastic. Anthony Hopkins is amazing, very worthy for his Oscar nomination.