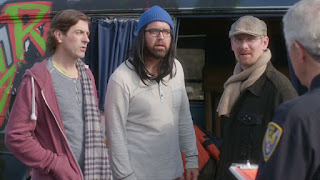 While the film was made and premiered at the Santa Barbara International Film Festival in February 2018, The Independents is a coming-of-age, musical, comedy/drama that focuses on the life and the traveling career of their own music band called The Sweet Remains. The film features the band in their main leading roles. The Independents is written and directed by Greg Naughton and produced by Naughton, Jonathan Burkhart, and Dorottya Mathe.

The Independents focuses on the three struggling singer-songwriters, consisting of Rich, Greg, and Brian, whose chance-meeting rekindles each of their fading dreams of making it in the music business whilst traveling on their tour.

The real-life band members Rich Price, Greg Naughton, and Brian Chartrand portray themselves in the entire film, giving the whimsical formulaic tale of how their music career has caught on the road throughout the film with music being heavily used to bring a strong, exercising Beatles-flavored dynamics for this artistic craftsmanship.

With some heavy direction, Naughton drew inspiration from several films and documentaries from the several bands and real-life musicians in order to create a fine, musical-comedy film that even the audience should watch and remember the good times any music group has done before they get disbanded. Naughton, the three band members, and the full crew did the zaniest job on perfecting the tone and the music in the film thanks to the band members’ experience on bringing magic and music towards their fans. And the music compositions from the music-playing trio sounded lovely and easy to spot on for its touching harmony. Though, the writing and the editing are a bit gritty and cringey to add that effect for an ordinary coming-of-age drama film for its vibrancy and accuracy.

While the main cast are heavily focused on the trio of band members, Hollywood celebrities also appear in their supportive roles. Here, we have actor Richard Kind (Spin City, Curb Your Enthusiasm, Pixar’s Inside Out) as Granny, Chris Sullvian (Guardians of the Galaxy Vol. 2) as Alvin, George Wendt (Cheers) as Eduardo, Broadway actress Kelli O'Hara as Kelly, James Naughton (Law & Order) as Officer Sanders, and Boyd Gaines (Law & Order) as Professor Green.

With all the musical and the dramatic pieces put together, The Independents is a great film, it runs about 97 minutes for its length of time. Naughton, the band, and the full cast and crew did an outstanding job on keeping the time-filming pace and vibrancy of the film. I felt like this film is very easy but hard to follow when it comes to musical films with band members being publicly featured. If you want to watch this, please do so when it comes out on digital.