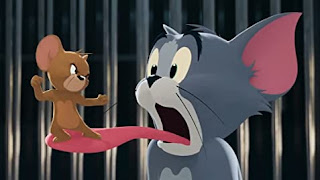 This new, nostalgic Tom and Jerry movie have missed their hits!

Just you know, there was another Tom and Jerry movie that was released in 1992, which flopped the critics’ reviews and the box office worldwidely, so this theatrical film counts as a second-timer out of the entire Tom and Jerry media. This new Tom and Jerry movie marks the first Tom and Jerry production that came to light without the involvement from the original creators William Hanna and Joseph Barbera who died in 2001 and 2006 respectively. Based on the characters created by Hanna and Barbera, the film is directed by Tim Story and stars Chloë Grace Moretz and Michael Peña in their onscreen, main-leading live-action roles while the titular characters are voiced by William Hanna, Mel Blanc, and June Foray via archival recordings.

Tom and Jerry focuses on the animated titular duo looking for a fresh start of their lives with Jerry taking up residence at the Royal Gate Hotel, located in New York City. However, when Jerry is discovered, a newly-hired hotel employee Kayla hires Tom out on the street to get rid of Jerry before the wedding starts, leading to a fight and a cat-and-mouse chase between each other.

After handling directorial duties from the first two Fantastic Four films (with Chris Evans in them) and Ride Along film series (featuring Kevin Hart and Ice Cube), Tim Story and his crew are trying to bridge up the gaps between live-action humans and cartoon characters evoking in the same time, same location settings. Story and his live-action/animation teams are trying multiple ways to get humans interact with cartoon folks in just the right consistency, mainly Moretz and Pena’s onscreen encounter with the animated duo, as if they want to make this film to be as realistic and simplistic as Who Framed Roger Rabbit, which was dated back in 1988.

Though, there are lots of worst things being taken for the film. The plot and the animation are very messy and aren't realistic as they are compared to Who Framed Roger Rabbit. The crew are trying their best to put more good-old 1900s cartoon nostalgic feels and thrills in the film but sadly it didn’t go really well as planned, even the characters' slapstick performances just aren't helping enough and fails to penetrate laughter and surprising emotions for that old-school cartoon classics. Additionally, the writing is very gritty and confusing throughout since the director doesn’t focus on the animated duo, instead the main focus on the film is particularly the live-action cast, which is completely unnecessary. Everything else, not so much, not even the ending which is very confusing that makes this film heavily discouraged from liking or enjoying this film.

Aside from the full cast, actors Nicky Jam, Bobby Cannavale, and Lil Rel Howery also feature in their voice roles for their hand-drawn animated characters in the film. Jam as Butch the black alley cat, Cannavale as Spike the Dog, and Howery as Tom’s Shoulder Angel and Devil. In addition, as a substitute for archive recordings, legendary voice actor Frank Welker returns to voice Tom and Jerry respectively. And lastly, Bollywood star and Indian-Australian actress Pallavi Sharda appears as Preeta, the bride of the wedding and Ben's fiancée.

After some ups and downs, Tom and Jerry isn’t a great 100-minute movie as nostalgia really had a harcore on bringing the classics back like the cartoons ones. This live-action/animated flick is an animated guilty pleasure right there for both audiences and critics who grew up watching Tom and Jerry shorts back in the day. Though, the only thing that makes the film enjoyable is Chloë Grace Moretz and Michael Pena's performances right there and so does the animated duo from the start. I hate to say this but, if I were you, I would rewatch Who Framed Roger Rabbit to make up for those hundred minutes of your life, or better yet, wait for next week for the studio’s rival, Disney, for the upcoming animated film Raya and the Last Dragon.

One last thing, this film is dedicated to the Tom and Jerry animator and cartoonist Gene Deitch who died on April 16th, 2020 during the production of this film.