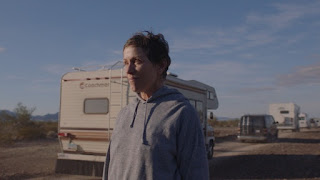 Nomadland is a bestie of the year!

People may ask, “Who says any non-Americans can’t make American films?” The answer is Hollywood, but before director Chloé Zhao takes on her big, breakout directing role for MCU’s upcoming Eternals film, she brings the real definition of what motion pictures are all about in our cultural ways of seeing something at a movie theater and that is making Nomadland. A film doesn’t have to start or end with Hollywood. Films are as good from anywhere coming from visionary filmmakers all around the globe. This film is based on a book written by American journalist Jessica Bruder and features Frances McDormand in her main-leading role with David Stratharin in his supportive role given by Zhao.

Nomadland takes place in 2011 and centers on a woman named Fern who, following the economic collapse of a company town in rural Nevada, sets off on the road exploring a life outside of conventional society as a modern-day nomad while looking for seasonal jobs around the winter.

Frances McDormand takes on her leading role as Fern, a lady who has been traveling in her van to find work throughout the winter season while actor David Stratharin appears as Dave. The film also features the real-life nomads Linda May, Swankie and Bob Wells as Fern's mentors, fictionalizing themselves onscreen to guide Fern in her exploration through the vast landscape of the American West.

This film serves as Zhao’s third feature film to direct after her previous experiences with Songs My Brothers Taught Me and The Rider. She is set to direct her venturing Marvel blockbuster film Eternals, featuring Angelina Jolie and Richard Madden, which will be released in Fall 2021. For this film, she takes her job of making films based on one’s stories extremely well. She and her camera crew really know how to take some good filming shots on the characters, the setting, and the real nomad scenes to see how people can study about the modern lifestyle and the differences on how anyone can live their life to the fullest. Not to mention that the script-writing, the editing, and the cinematography are anonymous and ambiguous, ful-filling how anyone can see how conflicts and issues are resolved when it comes to overcoming challenges they faced in the film.

Speaking of that, the casting of real world people is a bold, but fantastic move by the film makers. It adds much realism to the fictional story that just can't be manufactured and theoretically lets anybody, including myself, get some of these fascinating glimpses into a world that is way above different than my (and your’s) own world. The main point of the story is that you can’t judge a movie by its name. It is pretty much like a movie that has a very documentary-like flavor at certain times.

Nomadland is a nice magnificent two-hour flick. Zhao and McDormand really nailed their parts together to bring all the ingredients down together. Seems like an Oscar-worthy for Zhao and McDormand. This is a very quiet movie and is deeply a must for all ages. It is a very slow paced film due to its setting and the atmosphere the director has given us, but I didn't find this overwhelmingly hindered by the experience in any way though, I was never bored when I was watching this. Needless to say, you should go watch this, you’ll be fascinated by the wilds of nature and drama anyone has ever experienced in their entire life. It’s an easy flick to regret if you missed out on this!