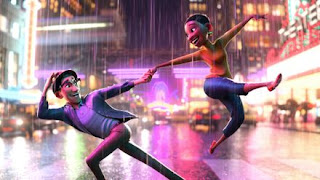 Us Again is a very common, but riveting title for that name to attract Disney fans and to add a few pointers to those who wanted to become visual animators and voice sharers in the future. It is the first short film in five years to be produced by Walt Disney Animation Studios and to be preceded in front of feature film since Moana. Usually when it all comes down to short films, the studio releases them in front of feature films as part of the studios’ tradition, but these days, the studio reverts to making short films for Disney+ instead which really bumps everyone out, especially Pixar fans as well. This short is heavily directed by Zach Parrish, who was the head of animation of Big Hero 6, released back in 2014, which won Best Animated Feature Oscar.

Us Again focuses on the relationship between the elderly man and his young-at-heart wife who rekindle their zest for life through dance on this one magical night in the city.

The characters are given no dialogue in this short, though it is heavily influenced by Keone and Mari Madrid, the famous dancing duo. This magical tale, despite being set in the modern, present-day world, is just an absolute way to reminiscent musical films being shown which is what Parrish and his short-film team really wanted to capture these enduring moments of any coming-of-age feels for both children and adults while growing up.

The story, the animation, the lighting, the music from Pinar Toprak, and the characters are very enthralling and captivating to see to enhance one’s own amusement. It is like a mixture of any coming-of-age musical classics like Mary Poppins,West Side Story, Singing in the Rain, and Grease. Following the no-speech rule, Zach Parrish, as director, guide the animators on imitating the dancing duo’s moves onscreen as they wanted to make it a fine-wine musical, but silent flashy short that adds an excessive amount of tone, the vibrancy, and a whole lot of richness compared to other musical films that involves singing-and-dancing, and to Disney-Pixar theatrical shorts due its formulaic ways of storytelling and the no-speech rule that kept the tradition very irresistible.

Us Again is a brilliant short film that serves as a fine opening act of Disney’s Raya and the Last Dragon. It certainly comes between musical and coming-of-age drama in that genre. The director has done a marvelous job following the Pixar formula and sharing his passionate voice. I admired every task Parrish and team have accomplished. I love this theatrical short, it’s heartwarming and wonderful with that same feeling of watching the Pixar shorts. I’m glad Disney returns on making shorts that will be shown in front of full-length feature films. This short film is worth a watch if you’re planning on seeing Raya and the Last Dragon in theaters. You will love it, just as you love the Pixar shorts entirely with that same reaction on your face.