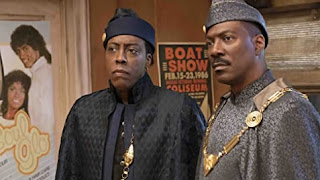 People have been savagely waiting to see if any sequel from any original film can be quite as good, unlike that insipid Dumb and Dumber To, Zoolander 2, or Independence Day: Resurgance. This long-awaited sequel really brings a lot of nostalgia for lots of Eddie Murphy fans out there, but it’s very questionable whether this sequel will outstand the original. After taking directing duties from Dolemite Is My Name, Craig Brewer collaborates with Eddie Murphy again to helm this sequel, featuring Murphy and Arsenio Hall reprising their main-leading roles while actors Jermaine Fowler, Leslie Jones, Tracy Morgan, Wesley Snipes, and the returning James Earl Jones appear in their supportive roles.

Coming 2 America takes place after the events of the first film, former Prince Akeem Joffer is set to become King of Zamunda when he discovers he has a son he never knew about in America – a street savvy Queens native named Lavelle. Honoring his royal father's dying wish to groom this son as the crown prince, since Akeem and Lisa’s daughter is ineligible to take over the throne since Zamunda law has to be a male heir to take the throne. Akeem and Semmi set off to America once again.

Murphy (Shrek series) and Arsenio Hall reprise their roles as Prince Akeem Joffer, who is about to be king, and his friend Semmi respectively, taking the audience and fans to their next adventure after the 1988 original film. The film also includes the returning cast of Shari Headley as Akeem’s wife and queen Lisa Joffer/Lisa McDowell, John Amos as Akeem’s employee Cleo McDowell, Paul Bates as Oha, a royal servant, and the legendary James Earl Jones (Star Wars, The Lion King), reprising his role as King Jaffe Joffer.

With the direction from Craig Brewer himself, the story seems to be in order when it comes to finding a new chapter for Eddie Murphy's characters in the film. Brewer and the writing teams, along with Murphy himself, want to make a nice, gentle sequel that brings a lot of goodness, the comedy keys, and the natural flavors to it as Murphy and his team are trying to rehash. Even so, Murphy orchestrated himself and Hall on following along with the character parts and the settings in the sequel, plus adding much humor to that effect. Murphy and Hall both look like they are having a hard time remembering what they did in the original film, but they just simply work themselves out as they are both having fun working on this film as if this serves as “Chapter 2” of the book.

Though there are some downsides in the film due to unorganized, baffled plot arcs on the first half of the film, the mystified-gritty writing on some parts of the story, and Fowler’s Lavelle character being introduced as a son without any personal identification or DNA test to see how this character can possible be the rightful connection towards Murphy’s character onscreen (and the entire film as a whole). Because of this, it feels like the sequel has brought up some family truth-bombs to drop as family and seeking long-lost relatives are part of the tale’s formulaic dynamics, though the comedy and the African-stylistic culture are what makes this film entertaining for people of all ages.

While the film is funny but unamused, the costumes right there throughout the film are fabulous to make all the Zamundans look terrific and royalty, thanks to Oscar-winning Black Panther costume designer Ruth E. Carter, thus meeting its credentials on crafting a African-American film with many cultural tastes and outcomes.

Also appearing in the film are the surprising cameos of Rick Ross, Davido, and Morgan Freeman.

Coming 2 America is an average film, maybe landing between the good and the bad films in that section. It runs almost 110 minutes in length. I didn’t love it or hate it, I just think this film didn’t live up to its standards like the original film. Though I heavily enjoyed Murphy’s and Hall’s performance like before as well as paying high respects to James Earl Jones. While the cult, classic original film still holds up to its glory on both raucous romantic comedy and African American fairytale, the follow-up is toothless, but comical to revisit the moments of greatness yet too much of the same old story if you’re in the need of looking for something fresh. I'd rather go back to rewatch the original film again. This film is more like “Coming to Promiseland” in that manner.