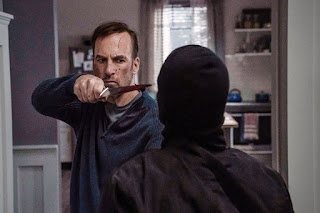 Nobody is a fool to see Bob Odenkirk back in action!

Nobody is such a strong word for its title to avoid confusion with another film, Nobody’s Fool, directed by Tyler Perry, but if anyone who is a fan of Bob Odenkirk could get a good taste in this action, crime-thriller flick. This film looks very interesting to see with Odenkirk taking his steps into something hotter and catchy this year. Nobody is directed by Ilya Naishuller and stars Bob Odenkirk in his main role, along with Connie Nielsen, RZA, Aleksei Serebryakov, and Christopher Lloyd in their supportive roles.

Nobody focuses on Hutch Mansell, who, after the thieves ran into his home, declines to defend himself or his family to prevent any serious complications. When his family begins to drift away from him, it ignites his resentment about being an unsubstantial father and husband, thus awakening his suppressed skills and illuminating his dark secrets.

In the film, Bob Odenkirk (AMC’s Breaking Bad and its spin-off Better Call Saul) portrays Hutch Mansell, a father to his son Blake and a husband to Becca Mansell, who refuses to save his family from burglars invading their home. Gage Munroe (Hotel Transylvania: The Series) and Connie Nelson (2017’s Wonder Woman, Gladiator) appeared in the film as Hutch’s son and wife Blake and Becca, supporting the protagonist.

Director Ilya Naishuller, who have taken his directing duty from 2015’s Hardcore Henry, takes the filming stage to guide Bob Odenkirk and the cast on how any action film is heavily done in certain levels. This includes guiding actors and the cinematographers to shoot some cooler stunts, comedic character performances, and heavy-visualized action sequences, compared to John Wick series and other thriller films people have watched, thanks to Naishuller’s partner and screenwriter Derek Kolstad who utilized his script-making duties from John Wick films and sets out on his big, breakout writing duty for his new television miniseries, Marvel’s The Falcon and the Winter Soldier, which will be shown on Disney+.

While the film is nice and easy to follow when it comes to storytelling, the director gave weak characterizations for Hutch’s family characters as the wife, son, and daughter sounded too weak and helpless, waiting for the man to do the job. Thus, giving them the damsel-in-distress character build-up as if someone is waiting for Superman to be rescued without even thinking about them strongly to how each character gives its personal trait. This is something the filmmakers have missed when all comes down to character developments.

Also appearing in the film are RZA (Kill Bill: Volume 1) as Hutch’s half-brother, Aleksei Serebryakov as Russian mafia lord Yulian Kuznetsov with a Robert-De-Niro persona-type, Christopher Lloyd (Back to the Future) as Hutch’s father, Michael Ironside as Eddie Williams and Colin Salmon (Resident Evil) as The Barber. And lastly, better not forget about Paisley Cadorath who also comes to the stage as Sammy Mansell, Hutch's daughter.

Nobody is a classical, thrilling 92-minute feature film, crossing between John Wick and Taken films. It’s funny, exciting, emotional, and epic in that order. Odenkirk really nailed the role as I really enjoyed every scenery Odenkirk has ever taken freshly based on his acting professionalism under the director’s blessing. I feel like this film may deserve at least one Oscar nomination and maybe at least one sequel if they ever come up with something cool and radical for the next chapter. Surely this film gives its good 90s (or early 2000s) vibes and it’s really off to a good start for 2021 for any action film being released in theaters. I like this film, but I can’t give a higher rating on this chilly so-called “crime” film.

Email ThisBlogThis!Share to TwitterShare to FacebookShare to Pinterest
Labels: Henry Pham, Nobody review