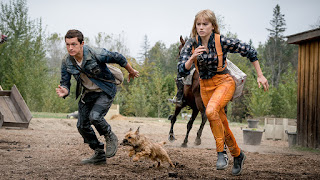 Chaos Walking is a film with a Hunger Games hype!

Science fiction and dystopian films being mixed all together aren’t my real thing, but Tom Holland and Daisy Ridley are such admirable actors in everyone’s eyes and minds. The film gives me a similar vibe compared to The Hunger Games series or Maze Runner since the film is also heavily based on the sci-fi trilogy Chaos Walking, adapting its first book, The Knife of Never Letting Go written by Patrick Ness who also serves as a screenwriter for the film. As mentioned, the film stars Daisy Ridley and Tom Holland in their main-leading roles while actors Mads Mikkelsen, Demián Bichir, Cynthia Erivo, Nick Jonas, and David Oyelowo appear in their supportive roles.

Chaos Walking follows a young man named Todd Hewitt who lives in a dystopian world where there are no women and all living creatures can hear each other's thoughts in a stream of images, words, and sounds that are widely known as this so-called "Noise." When a young female crash lands onto the planet, he must help her escape danger.

To those who are not familiar with Tom Holland and Daisy Ridley, Holland portrays Peter Parker/Spider-Man in the MCU’s Spider-Man films while Ridley portrays Rey in the new Star Wars trilogy. Holland also voices Ian Lightfoot in Disney-Pixar film Onward, which was released in March 2020 just before COVID hits the earth, while Ridley appears in 2018’s Ophelia as the titular-leading character. Here in the film, Holland made his onscreen appearance as Todd Hewitt, a man living in a dystopian, distant world while Ridley steals the show as Viola Eade, a young woman who crash lands onto his world.

Doug Liman, who previously directed The Bourne Identity and Edge of Tomorrow, takes the mantle as sole director. He has been in the movie business since the mid-1990s when he first directed 1996’s Swingers, featuring Jon Faverau, the founding father of Marvel Cinematic Universe. While the performances of Holland and Ridley, the story borrows several key elements from the Hunger Games series, taking much more complexity of the characters and the forest setting compared to that said film. It pretty seems as if Liman wants to crank things up a notch in regards to his camera-shooting professionalism like he did for Bourne Identity films while taking influences on other science fiction films that involves people living in a dangerous society.

This whole building-story-arcs thing comes together alright as the plot flows by but it's just not well done enough to engender a higher score. Daisy Ridley puts in another mannequin-like performance, and she is carried away like by Holland for most of the film. Despite the chemistry between Ridley and Holland being enjoyable to watch, the CGI and special effects given to those two characters with more range simply made the characters underdeveloped and the film increasingly uninteresting.

Sorry to say this but, Chaos Walking is a disappointing 109-minute flick. It doesn't have any surprising moments and exciting thrills, but Holland and Ridley are what makes this film pleasant to watch. I like Tom Holland as he did everything he could for Daisy Riley onscreen together, which is very chivalry, but I didn’t like the film entirely as I actually felt like I’m watching a plagiarized version of The Hunger Games or Maze Runner. The director and the writers have thrown too many eggs in one basket due to much CGI and special effects being that have taken more attention and input than the characters’ development. I hate to say this, but I rather skip this unless you can take proper precautions on this film.