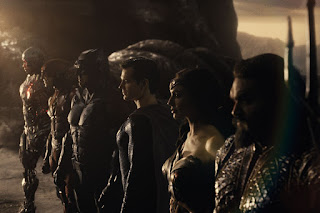 Zack Snyder’s Justice League is at the Avengers: Endgame level of DC Comics!

Fans, celebrities, and audiences have been waiting for this cut for a long time after that dreadful 2017 version was released, directed by Joss Whedon, which flopped the box office and critics’ reviews entirely. As a result, the future of the films and production lineups based on the DC Comics is in jeopardy, leading to the media speculation for Warner Bros. to focus on the superheroes’ solo, independent films before joining altogether in one film like Marvel’s The Avengers. In addition, the news from fans, the studio, and the filmmakers also led Zach Synder himself to produce and release his own version of the film, under the name, “The Snyder Cut.” The film is directed by Synder himself and features the ensemble cast of Ben Affleck, Henry Cavill, Gal Gadot, Ezra Miller, Jason Momoa, and Ray Fisher in their superhero role-playing game of the team.

Like the previous 2017 theatrical release of the film, Zack Snyder's Justice League follows the Justice League, consisting of Batman, Superman, Wonder Woman, Cyborg, Aquaman, and the Flash, as their mission is to save the world from the catastrophic, intergalactic threat of Darkseid, Steppenwolf, and their army of Parademons who are invading Earth.

Actors Ben Affleck (Good Will Hunting), Henry Cavill, Gal Gadot, Ezra Miller, Jason Momoa, and Ray Fisher return to this restored version as Batman, Superman, Wonder Woman, The Flash, Aquaman and Cyborg respectively. The ensemble cast have done an outstanding job of keeping in character as Synder would want. It seems pretty heavy to redo the entire scenes and film additional shots that haven’t been seen on the original version, thus making the Joss Whedom’s version very unpleasant to watch due to his unsuccessful attempts of making a greater story. This Synder cut is absolutely more-detailed as this version focuses on not only the heroes’ journey of saving the world, but also focusing on their times and memories with their families, which give the film much more structural tone and depth for the film and also providing some stronger character developments of the film.

Zack Synder, who left production of the 2017 version of the film following the death of his daughter Autumn, comes to the rescue after hearing the critics’ reviews on Joss Whedon’s directorial version. Synder’ direction really saves all the trouble of directing and providing guidance towards his fellow actors and the rest of the cast and crew. Reworking on this film is extremely difficult when it comes to story arcs being easy to follow and the cast knowing what to do in the sceney, but by the looks of it, the actors enjoy working with Synder as well as having good social relationships with him, better than Joss Whedon’s. Speaking of that, if you hear about Whedon, he was accused of his abusive behavior towards Justice League actors according to the news.

The special effects, the character development, and the music composition from Junkie XL are pretty ambiguous and tediously straight-forward, trailing with Avengers: Endgame for that distant flavor and texture being used and shown in the film. And the ending isn’t so bad either, leaving the rhetorical question from critics and audiences whether a sequel to his cut will likely happen in the future, but it appears as though Synder will likely say yes in that glorious manner. While the major improvements work, the time length of the film gives me a nervousness and a lot of anxiety to see, treating this like a four-hour episode or a movie miniseries released at the same time as opposed to separately on a weekly basis on television. Another issue is that some small parts of the story really threw me off, especially on that bloaty climax right there which kind of got lost in the center for that strategical backstory on the villains.

Some newer cast are present in the film whom they didn’t get to appear in the original version, Ryan Zheng is introduced as Ryan Choi while Kiersey Clemons portrays Iris West in the film. And lastly, Ray Porter portrays Darkseid, one of the main villains who threaten Earth.

Regardless of what is told and what is done, Zack Snyder's Justice League is a good four-hour movie event on HBO Max. It’s a massive improvement over it’s 2017 version. Synder really knows what to do and understands the nuts-and-bolts of how a great film is being made. My compliments to Synder himself as well as the six main actors and the rest of the crew who made this occasion possible by bringing this restoration back on its feet. One last thing, due to its time length, I highly recommend splitting two hours of your time watching this today or tomorrow and pick it up where you left off the next day after that. I kinda say, this is a must and this is far, the most anticipated film to watch for the studio and on HBO Max.