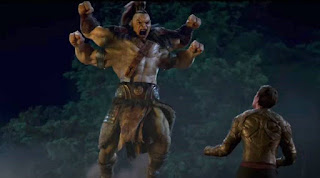 Mortal Kombat swings and clangs but misses their targets.

There were official plans for the next Mortal Kombat film after Mortal Kombat: Annihilation, but those plans have never been materialized following the critical and box office disaster of that said sequel, which was dated back in 1997. But now, this new Mortal Kombat film serves as a reboot of the franchise and a mortal comeback after years of onscreen absence. Based on the video game franchise created by Ed Boon and John Tobias, this reboot becomes Simon McQuiod’s directorial debut after periods of making commercials and stars Lewis Tan in his main leading role, alongside with Jessica McNamee, Josh Lawson, Tadanobu Asano, Mehcad Brooks, Ludi Lin, Chin Han, Joe Taslim, and Hiroyuki Sanada.

This Mortal Kombat reboot focuses on a MMA fighter named Cole Young who has been summoned to seek out the Earth's greatest champions in order to stand against the enemies and the threats from the Outworld in a high stakes battle for the universe and for the whole world.

This film features the new character named Cole Young, having been portrayed by Lewis Tan (Netflix’s Wu Assassins, Deadpool 2), while the majority of the actors are given character roles from the video game franchise. Here we have Jessica McNamee (USA’s Sirens) as Sonya Blade, Josh Lawson (House of Lies) as Kano, Tadanobu Asano (MCU’s Thor films) as Lord Raiden, Mehcad Brooks (Supergirl) as Jax, Ludi Lin (2017’s Power Rangers) as Liu Kang, Chin Han (The Dark Knight) as Shang Tsung, Joe Taslim (Fast & Furious 6) as Sub-Zero, and Hiroyuki Sanada (The Last Samurai) as Hanzo Hasashi who is later revealed to be Scorpion.

With McQuiod’s direction, the picture quality, the story, and color palette are a massive improvement from the 1990s action film era, making this installment look fresh, new, and improved. Even when he put this team to conceive the idea of putting many camera shoots in many places for its action sequences. The director and the crew have provided some great action sequences for the film and that strong “fight” choreography, which gave the film higher points, are something to be mostly expected all out of all the director has offered from a movie within its title.

In addition to his directing, the colorful old-school special effects regarding the characters and their abilities are also very well done as if the team wants their foods to be cooked to their desired temperature. The special effects do consider how the budget constraints this movie had. McQuoid, the cast, and the crew knew all the drills, the nuts-and-bolts, and the ups-and-downs to see how a regular Mortal Kombat movie or a video game is supposed to look like.

While this flick is fun to watch, there are some unenjoyable downfalls on this film. The villains are given weak personalities as they are very flat, unthreatening, and chemically unbalanced along with small numbers of those main characters given the same treatment. Another one is the dialogue and the script-writing are very flat, confused, and horrible as well. Third thing is there are so many Mortal Kombat characters being underused and wasted for that opportunity since the filmmakers wanted to focus on newer characters instead of turning their heads towards the franchise characters. And lastly, what is surprising is that this new main character Cole Young becoming the center of attention on this film and being billed on top as opposed to the Mortal Kombat characters, who are given the roles as supportive characters. My main guess is that the director wanted to take on a newer, refreshing approach on the franchise.

Mortal Kombat is a fun, but cautious flick for both fans and audiences out there who are looking forward to this movie based on what anyone saw on the trailer. I feel like movie trailers these days become the best thing lots of people watch out of any film but later, the entire film will be either a critical success or a failure when it comes out to the general public. McQuiod did a good job directing. If you love Mortal Kombat so much, then I say you can watch it, but you need to take proper precautions on that as I might have some struggles if I ever saw this movie again.