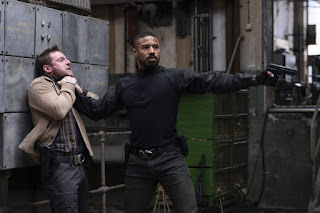 Tom Clancy’s Without Remorse is a film the world should see without regrets!

Partnered with Paramount Pictures, Tom Clancy’s Without Remorse is an action thriller film that primarily serves as a potential spin-off of the Jack Ryan franchise. Of course, as the franchise keeps on going, new cast and crew have replaced the old actors due to either scheduling conflicts with their projects, salary disputes, or just creative differences beyond their control. Having been directed by Italian filmmaker Stefano Sollima, the film is heavily based on the 1993 novel written by Tom Clancy and stars Michael B. Jordan in his main leading role, alongside Jamie Bell, Jodie Turner-Smith, and Guy Pearce.

Tom Clancy’s Without Remorse tells the story about a man named John Clark, a U.S. Navy SEAL, who uncovers an international conspiracy while seeking justice for the murder of his pregnant wife by the Russian soldiers. When Clark joins forces with fellow SEAL team member Karen Greer and the shadowy CIA agent Robert Ritter, the mission unwittingly exposes a covert plot that threatens to engulf the U.S. and Russia in an all-out war.

Actor Michael B. Jordan (Marvel’s Black Panther) portrays John Kelly (who is later named John Clark) in this film. If the name sounds familiar, he basically knows all the tips and tricks he used based on his character roles from action-packed movies he starred in, including Creed and Black Panther, the latter of which he portrayed a villain in the film, co-starring with opposite Chadwick Boseman. Actress Jodie Turner-Smith (Queen & Slim) receives her meatier role as Clark’s fellow SEAL member Karen Greer aiding with him while English actor Jamie Bell (Billy Elliot, The Adventures of Tintin) plays as CIA agent Robert Ritter. And lastly, but more importantly, actor Guy Pearce (The King’s Speech, Iron Man 3) made his onscreen supportive role as Secretary of Defense Thomas Clay.

The director in the film is Stefano Sollima who helmed his first Hollywood film Sicario: Day of the Soldado, featuring fellow MCU actors Benicio del Toro and Josh Brolin. Utilizing his wits and expertise from his directing duty in Sicario: Day of the Soldado, Without Remorse does what it is supposed to do like the previous Jack Ryan films. Sollima takes the viewers on a life-and-death journey to John Clark’s solo mission on fighting the bad guys on a consequential level. The story also takes on the fans and viewers back to their normal world when everything is safe and prosperous for our country.

The key to any Jack Ryan storyline is to film several parts at any location in any country as well as increase usages of gun violence shown in the film. Not to mention taking advice from any action-adventurous films that can make this story and the characters easy to follow through the perilous jungles along the way. The film also contains some Indiana Jones colors and comedy ingredients for that depth. And speaking of Jack Ryan and Indiana Jones, this film was completed at the time of Sean Connery’s passing in October 2020. He played Soviet submarine captain Marko Ramius in The Hunt for Red October, which was the first film in the Jack Ryan franchise, co-starring Alec Baldwin who played Jack Ryan in that film.

Some awkward scenes are given in the film despite the fun-filled action sequences being offered from the director, some of the villains in the film’s climax sounded flatter and weaker as the director. Small parts of the story threw me off from the some characters and the cringey screenwriting dialogue given by Taylor Sheridan and Will Staples. The film, however, did provide some steady cliffhangers for the future sequel as mentioned by Jordan himself.

Also appearing in the film are actors Luke Mitchell (Marvel's Agents of S.H.I.E.L.D.), Jack Kesy (Deadpool 2), and Brett Gelman (Adult Swim’s Eagleheart). Here we have Mitchell who appears as Rowdy, Kesy as Thunder, and Gelman as Victor Rykov, an escaped operative and an ex-Russian officer. And lastly, we have actress Lauren London (ALT) who has her small screentime at the beginning as John’s pregnant wife Pam Clark.

As far as revenge plots go, Tom Clancy’s Without Remorse has some moments, it clocks in at almost 110 minutes which it's supposed to have for its lengthy time constraints. Jordan did a great job focusing on his character as he tries his best not to disappoint his fans and critics out there. While the film did have some minor improvements and some flaws, this film is not a bust, but rather a tale that saves the franchise from being a critical disaster like the previous films being released beforehand. I honestly don't know if I’m going to like this film or say if this film will be a hit, but I do miss going out to the theaters as this deserves a theatrical release more than ever. This may sound like a hard pass but, if you love this film the same way as the previous Jack Ryan, you will have no regrets on this.