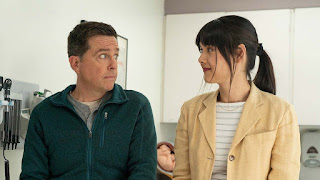 Some romantic-comedy films can be filled with lovestruck characters and gritty-or-witty writing, but this film is something any director can easily put up a good stunt on. Together Together serves as Nikole Beckwith’s second directorial effort after she helmed Stockholm, Pennsylvania, but this could be her first Hollywood film being screened in theaters or at film festivals. Additionally, this was shown at Sundance Festival 2021. Between this and directing Together Together, she is a known writer for Youtube’s Impulse, which ran from 2018 to 2019. Actors Ed Helms and Patti Harrison are here to lead the film entirely as main characters of the story.

Together Together centers on a young loner Anna who is hired as the gestational surrogate for Matt, a single man in his forties who wants a child. As the two meet, they come to realize this unexpected relationship will quickly challenge themselves on their perceptions of connection, boundaries, and the particulars of love.

Ed Helms (NBC’s The Office) portrays Matt, a single man who is in his forties whose main desire is to have a child despite not being married beforehand while Patti Harrison (Hulu’s Shrill) plays the character named Anna, a lonely, single pregnant woman who is twenty-something years old.

With Beckwith’s direction, this is the kind of flick people can refer to as "cute." It's certainly not an anonymous, groundbreaking effort that will change one’s life, but it will easily provoke some laughs and maybe some drama provided by two main actors that even cause you to get tear-jerked in a couple of scenes. Beckwith really conceived how romantic and comedy films can work out together while crafting a storyline and gathering some good dialogue being given to the characters thanks to her writing experience from the past. Beckwith pushes herself to new heights in her dialogue-writing that makes (and feels) so authentic, honest, and real to come across in one fresh take. Even throwing some Woody Allen references right there which give the film a few bonus points for the character’s point of view.

Ed Helms and Patti Harrison are really great in their parts. Helms proves that he can indeed do anything he puts his mind to it like he did from The Office while Harrison is very humble and vulnerable at her character role as Anna. This is the one of those roles where Harrison enjoys acting to bring some wondrous and lethal chills-and-thrills for her knowledge. Both actors love working together and share exceptional moments through Beckwith's witty screenplay. Packed with pure lightness and smart, yet insecure humor, Helms and Patti Harrison are such wonderful displays to see.

Together Together is a great 90-minute feature. This is one of the rarest romantic, comedy films that can supplant any other junky romantic-comedy flicks. It really possesses such a humorously, yet thoughtful screenplay that is joyful, fun that inexplicably passes on its own title, which carries more meaning than ever. I really enjoyed Ed Helms and Patti Harrison’s performances as they really boasted a lot of sincere chemistry, delivering two charming portrayals that became worthy of investing in. I certainly wish this film gets a theatrical release because it actually deserves it, no joke. I can tell you with strong confidence, this film is a must whether or not this film will be a critical success. Nevertheless, Nikole Beckwith deserves all the compliments (and attention) for her lovely take on such a formulaic tale.

Email ThisBlogThis!Share to TwitterShare to FacebookShare to Pinterest
Labels: Henry Pham, Together Together review