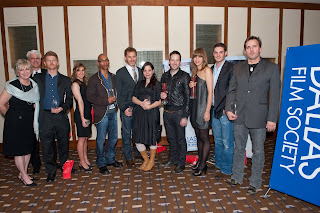 The Documentary competition jury also gave a Special Jury Prize to Michael Pertnoy’s and Michael Kleiman’s THE LAST SURVIVOR and a Special Mention for Editing (for Claire Didier’s work on the film) to Mark Landsman’s THUNDER SOUL.

DALLAS Star Award recipient John Lee Hancock (THE BLIND SIDE) made the presentation of the Target Filmmaker Awards during an evening that also included the presentations of the DALLAS Star Awards to Academy Award nominated director Frank Darabont (THE SHAWSHANK REDEMPTION, THE GREEN MILE) and cinematographer Wally Pfister (BATMAN BEGINS, THE PRESTIGE, THE DARK KNIGHT), as well as the Texas Avery Animation Award to Pete Docter (UP).

Dallas Film Society Executive Director Tanya Foster said, “The Dallas Film Society Honors” event was created to provide an exciting and glamorous event honoring our filmmakers to match the presentation and reverence shown them and their films throughout the festival. We are very fortunate that the Gail L. and Arthur E. Benjamin Foundation joined the DFS family and provided us with the means to put on the kind of show that this film festival and frankly, Dallas are known for.”

Matt Harlock’s and Paul Thomas’ AMERICAN: THE BILL HICKS STORY was the recipient of MPS Studios’ Texas Filmmaker Award and $20,000 in cash, goods and services. Robert Byington’s HARMONY AND ME received a Special Jury Prize. The presentation was made by MPS Studios’ Meredith Stephens with Bill Hicks’ niece Rachel Hicks on hand to accept the award.

The winners of the jury prizes for Best Short, Best Student Short and the Audience Awards each receive production and scheduling software from Entertainment Partners.

DALLAS IFF Artistic Director James Faust said, “We enjoyed a thrilling film festival with amazingly talented filmmakers and so many exceptional films that our audiences in more than a few cases happily found seats in the aisles so they wouldn’t miss out on any of it. And the competitions were just as spirited. It’s a lot of fun giving a film fest jury a challenge to choose one great film over several other great films”

Michael Cain, DALLAS Film Society Chairman, added “We understood very well going into this year that the eyes of the city of Dallas, the film festival community across the country and the international film community would be on us as we and Dallas took true ownership of this film festival. So, it could not be more gratifying to once again deliver the programming, peerless presentation and hospitality that have built our reputation on from year one.”

SPECIAL JURY PRIZE: HARMONY AND ME

Christian Gaines is the director of Film Festival Strategy, Data Syndication, and Business Development for IMDB.

Rob Nelson is a film critic and contributing writer for such publications and outlets as Daily Variety and Indie Wire.

Britta Erickson is the Festival Director for the Starz Denver Film Festival. She also produced the documentary CONVENTION.

Heidi Van Lier is a progremmer for the Slamdance Film Festival. She also directed CHI GIRL and is the author of The Indie Film Rule Book.

Orian Williams produced CONTROL and SHADOW OF THE VAMPIRE.

Chris Holland is the Director of Festival Operations, IFP.

Anna Clark is the author of Green, American Style. She is also the President of Earth People.

Kristen Sudelia is the Eco Advocate for Hotel Palomar.

Jon Korn is a Shorts Programmer for the Sundance Film Festival.

David Whillock is the Dean of College of Communication, TCU and Professor of Television and Digital Media, TCU.

Highlights included a nod to the Mexican Bicentennial that included a special programming block, a posthumous DALLAS Star Award (designed from Steuben Crystal, courtesy of Neiman Marcus) presentation to Pedro Infante as well as a presentation of the DALLAS Star Award to Guillermo Arriaga following a screening of his film THE BURNING PLAIN at the Landmark Magnolia and a special “Conversation with…” at the Latino Cultural Center. Other film artists participating in programmed “conversations” included Karen Black (with Women In Film.Dallas at the DALLAS IFF Filmmaker Lounge at Hotel Palomar) and John Lee Hancock following the presentation of his DALLAS Star Award at the Angelica Film Center. Amber Heard received the Film Festival’s inaugural DALLAS Shining Star Award prior to the screening of her film, THE JONESES at the Angelica Film Center.

The festival will close with DALLAS IFF with encore presentations of award winners and sold-out screenings on Saturday, April 17 and Sunday, April 18 at Studio Movie Grill Dallas at Royal Lane and 75 (11170 N. Central Expressway).

Overall, the 2010 DALLAS International Film Festival showcased 62 features and 98 shorts for a total of 160 films from 25 countries.

The Dallas Film Society celebrates films and their impact on society. A 501(c)3 non-profit organization, The Dallas Film Society recognizes and honors filmmakers for their achievements in enhancing the creative community, provides educational programs to students to develop better understanding of the role of film in today's world, and promotes the City of Dallas and its commitment to the art of filmmaking. The annual DALLAS International Film Festival, to be held April 8 -18, 2010, is a presentation of The Dallas Film Society. In addition to producing one of the largest festivals in the Southwest, The Society produces numerous year round events, screening series and partnership programs with arts organizations around the city. For more information, visit www.dallasfilm.org

Posted by Dallas Movie Screenings at 5:27 AM