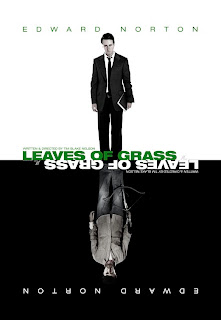 Bill Kincaid is an academic at a university in Rhode Island. He gets a message that his twin brother Brady was shot with a cross bow. He hasn’t been back to Oklahoma nor have any contact with his brother and mom in 12 years. Reluctantly he decides to return.

Brady Kincaid (both brothers played by Edward Norton) is about as opposite in personality and lifestyle than his identical twin. He is picked up from the airport by Brady’s best friend and business partner Bolger (Tim Blake Nelson). He takes him to this convenience store where one of the locals mistakes Bill for his brother only “cleaned up”. The rival drug dealer Buddy (Steve Earle) takes “Brady” to task for trying to steal his territory with Pug Rothbaum (Richard Dreyfuss), a rich powerful drug lord/business man in Tulsa. So he beats him up. When Bill wakes up later, he comes face to face with his brother. Brady staged the ruse because he believed it was the only way to get Billy back home. Brady explains that he wants to get married and he’s going to be a dad. He shows his brother his hydroponics system for growing the best marijuana in the area. Its very state of the art and Brady shows a natural aptitude for this business…despite that it’s illegal. Brady wants to shut down operations and change is life. But he needs his brother’s help in making it seem that he’s really in town by visiting their mother Daisy (Susan Saradon), while Brady goes to Tulsa to work out a deal with the Jew since he was the one of financed this whole operation. To entice Bill he invites over Janet a former classmate who is a poet teaching at the local high school.

As with anyone going back to their hometown, you find yourself falling into the same rhythms that you thought you left behind. Brady is the loose, happy person to his brother’s uptight attitude. The scene where Brady talks Bill into sampling his “varietals” from his pot farm is quite humorous. From the apparently inside jokes on Tulsa, to the southern drawls, and the local ambiance of small town Oklahoma, punctuated with a wonderful soundtrack, Leaves of Grass is rich in little details.

The movie plays light and amusing until the last acts when Brady confronts Pug. The violence that follows drops that ball on what up to this point when everyone was relaxed and having fun. It’s like 2 different movies. Tim Blake Nelson who wrote, directed and acted in this feature would have gotten more mileage if the resolve of the brothers’ dilemma had not resorted to gunplay. It’s like he painted his characters into a corner, and instead of finding an interesting solution, decides to shoot everyone. In this case it seemed like a lazy solution.
(Review by Reesa)

Email ThisBlogThis!Share to TwitterShare to FacebookShare to Pinterest
Labels: Leaves of Grass review