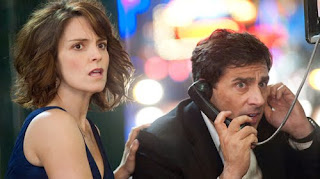 Phil and Claire Foster are a busy working couple with kids trying to find get some romance in their life with a night on the town. They attempt to get seats at the hottest restaurant in Manhattan by stealing a no-show’s couple’s reservations. Unfortunately the no show couple happens to be thieves and are being hunted by a pair of corrupt cops. The Foster’s didn’t bargain on getting this much spice in their lives.

Like most suburban married couples, the Fosters (Steve Carrel and Tina Fey) are in a rut. Their weekly “date nights” is the same dinner of potato skins and salmon at the local tavern in New Jersey discussing family chores and schedules. They are concerned as their two best friends; the Sullivans (Mark Ruffalo and Kristen Wiig) are splitting while living the same kind of life as theirs. Not wanting to fall into that hole of indifference, they decide to shake up their weekly routine. They head into the city to try the trendy eatery and are scoffed at as reservations are made months ahead of time. Not wanting to ruin a potentially special evening Phil in a quick-thinking moment raises his voice when a name is called and the people do not respond. They pretend they are the Tripplehorns to get seats. Before they can finish their risotto, the Fosters are approached by bad cops Detective Collin (Common) and Detective Armstrong (Jimmi Simpson) who mistake them for the real Tripplehorns who are really common criminals who had stolen something from some dangerous people. Before Fosters know it, the buzz they got a dinner has ended when guns are pulled.

Running from the bad guys, they seek help from Detective Arroyo (Taraji P. Henson) who doesn’t believe this normal couple has people shooting at them. When they see the bad cops at the station, they realize they can’t rely on the police. Claire suggests Holbrooke Grant (Mark Wahlberg) a former real estate client who is a security expert. Holbrooke just wants to spend time with his beautiful Israeli girlfriend, when the Fosters turn his night upside down. Wahlberg spends most of his on screen time topless…for those of us who find that fact important in seeing this movie. The Fosters decide to find the real Tripplehorns to straighten out this very real threat on their lives. Taste and his stripper girl friend Whippet (Mila Kunis and James Franco) only get them into deeper trouble. Phil keeps making these plans to correct their dilemma, and Claire keeps surprising Phil with her resourcefulness. Their series of adventures lead them on car chases, pole dancing and breaking and entering, some very funny and poignant moments. It’s a great reminder not to take your spouse for granted and adding a little adventure will build memories and bring you closer.

Tina Fey and Steve Carrel are amazing funny and insightful comedians with their own very successful TV shows, 30 Rock and The Office. Not surprising their chemistry works well together as a normal sensible couple that drop off handed comments like melted butter. It is directed by Shawn Levy (Night at the Museum) who came up with the idea for the movie one night while on his own date night. Writer Josh Klausner and Levy are also at the same stage in life with careers, kids and trying to find a balance creating an adult skewed comedy that revolves around what happens to the parents when the kids go to bed. The success of this film rests on the comedic timing of Carrell and Fey and as always they deliver. For your next date night you may want to consider Date Night.
(Review by Reesa)

Posted by Dallas Movie Screenings at 10:46 AM