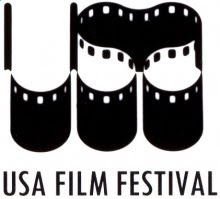 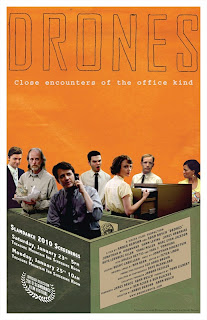 In a typical office meeting, the boss offers a power point presentation using bees as an analogy for the workforce mindset. How the busy worker bees…the drones…keep the hive active and productive. At OmniLink Brian Dilks is comfortable in the monotony of his office world; joking with his best friend Clark and flirting with Amy in the next cubicle.

One day Clark (Sam Levine) encourages Brian (Jonathan M. Woodward) to take the next step with Amy (Angela Bettis), and did he need anything in the supply closet? Brian makes an attempt to ask her out, but her response is vague so he seeks out Clarks’ advice. When he goes to the supply room, Clark is sitting in the dark with eerie lights coming out of his hands. Clark then confesses to Brian that he’s an alien from another world. Clark is surprised that Brian is taking it pretty well, not so much the taking over earth scenario which Clark assures is not right now. He tells Brian that there are others like him in his office. Brian is shocked, but not so much that he forgets his main priority about what to do about Amy. Later, Amy tells Brian that she’s ready to go out with him that weekend. Their date goes really well and they return to work so smitten that their workmates are calling them “Bria-amy”. Amy tells Brian that she’s new to this emotional life because she’s an alien from another planet and they plan on destroying the earth too. After their first fight Amy is overwhelmed at what she is feeling tells the copying machine to step up their plan to destroy earth in the next 24 hours. It’s up to Brian to make up with Amy and save the world.

Working from a script by Ben Acker and Ben Blacker, co-directors Amber Benson and Adam Busch (Tara and Warren from Buffy), created a film on a tiny budget in a Louisiana office building. They created the movie in two weeks utilizing local cast, crew and resources. The film an official selection at Slamdance 2010 and is working around the festival circuit was just purchased and hopefully it will see a wider release. The matter of fact dialogue and dry humor keeps the story rolling along by the remarkably able cast. It may even make you look a little closer to those working around you.
(Review by Reesa)