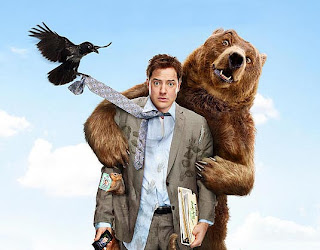 Dan Sanders has moved his family from Chicago to oversee a new housing development in the pristine Oregon forest. His family is experiencing a little culture shock and not really happy with the change. But Dan believes this is a great career opportunity until the he starts thinking some little woodland creatures may be pulling tricks on him.

Brendan Fraser’s Dan is a happy guy, he lives in show home of the development his company is creating and just has to walk outside to supervise his team of construction workers. His wife, Tammy (Brooke Shields) got a job teaching at the local school. His rebellious teenage son Tyler (Matt Prokop) doesn’t think he will meet anyone interesting at his high school. They don’t see the critters causing the sprinklers to suddenly drench Dan when he goes to get his paper. Dan doesn’t quite believe it either until the little attacks seem to get more intense and elaborate. The forest denizens don’t want the development encroaching on their habitats. The animals over hear that Dan’s boss Neal Lyman (Ken Jeong who steals his scenes) is planning not only these homes, he wants to cover acres with a major urban landscape. The animals decide to mobilized and launch a full out attack on Dan.

Dan becomes a little unhinged by the various calamities set up by the animals. He in turn builds traps all over his yard. The critters fill his car with skunks, trap him in an outhouse, and steal his clothes Fraser who gained 20lbs for this movie runs around in a woman’s pink velour jogging outfit is not a pretty sight. Of course no one notices the animals; they just think Dan is too stressed by his job. Dan begins to realize that his boss is really not really building green homes. Dan is not comfortable about this, but he hangs on to save his job because he thinks he’s doing it for his family. When his boss has all the creatures captured and put in cages, Dan decides to join the other side.

Director Roger Kumble and writers Michael Carnes and Josh Gilbert have created a slapstick flavored movie with the cute raccoons, bunnies, skunks and birds exacting vengeance. The anthropomorphic computer generated furry actors fortunately don’t speak otherwise the cheese level would have gone over the roof. They are very organized human being terrorists who have centered their ill fated attention on Fraser’s goofy, befuddled Dan. The comedy is painted in really broad strokes with an underling lining of socially acceptable environmental propaganda. Little kids will love the critters playing mean tricks on the dad character and Fraser milks the laughs like no tomorrow. Shield still looks really good and can match Fraser’s comedic abilities but is basically underused. Stay for the credits to see the little dancing videos of the cast and crew which was IMHO the best part of the movie.
(Review by Reesa)

Posted by Dallas Movie Screenings at 8:38 AM