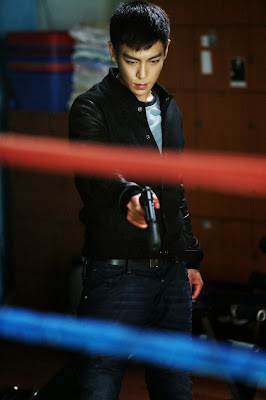 Anyone familiar with K-pop will be thrilled to note that Big Bang rapper T.O.P, Choi Seun-hyun, is starring in the South Korean spy thriller directed by Park Hong-soo and written by Kim Soo-young. T.O.P has proved his acting chops having starred in other movies and winning best new actor for his work in 71:Into the Fire. In this dark grim story his natural charisma as a musical idol is damped down to a single stoic expression by the tragic storyline.

Choi who is 26 years old plays 18 year old Myung-hoo who with his sister Hye-in (Kim You-jung) live in a North Korean labor camp after his spy father is killed trying to return home to this kids. Colonel Moon Sang-chul recruits the boy to become an agent by dangling the offer of freedom for him and his sister. Myung-hoo is sent south after some training with some other defectors where he is taken in by some members of a sleeper cell Unit 8. They are long term spies having integrated into society by running a pharmacy. They also launder money which they send north. Since Myung-hoo has his own mission, they basically try and keep out of each other's way. Myung-hoo being 19 now has to attend high school and he's introduced as his cover name Dae-ho. His first friend there is his desk mate who happens to have the same name as his sister Hye-in (Han Ye-ri). She is often bullied in school, and so is Dae-ho being the new kid.

Dae-ho's mission is to track down the Section 35 spy who has been assassinating members of Unit 8. Apparently there's some upheaval in the Pyongyang regime as the old leader is soon to be replaced by his son and the power struggle fuels the war waging between Unit 8 and Section 35. For American audiences this is probably not necessary to understand the particulars to enjoy the film. It's just an interesting concept that normal looking neighbors who run the bakery, butcher, food stands and pharmacies are actually deep sleepers for another government supplying Dae-ho with weapons (a gun in a cake) and intel to complete his mission.

Dae-ho is a competent machine. When he finally lets loose on the school bullies after they harass Hye-in and almost takes down his teacher does he finally get interesting. The change in lifestyles from the North and the South begins to affect Dae-ho. He begins a friendship with Hye-in which as his handlers point out later is the chink in his armor. When he finally realizes there is no going home, he is forced to get his job done in other to free his sister and only thing that drives him to the ultimate decisions.

If this was an American movie, the choice given the Dae-ho would probably be more hopeful and the story would have contained a little bit of humor to lighten the load. Fortunately, it's a South Korean film that doesn't stoop to the easy happy ending. T.O.P still rocks out.
(Review by reesa)