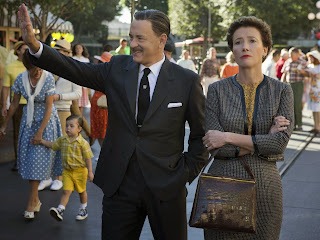 Who knew that the 1964 Disney classic childrens film Mary Poppins had such a difficult development? Most people only remember the catching tunes like a “Spoonful of Sugar” and “Supercalifragilisticexpialidocious". The movie was based on a popular book series by P. L. Travers about a magical nanny who helps a dysfunctional family in London almost was not made because the author was reticent about signing over the rights. Director John Lee Hancock (The Blindside) and writers Kelly Marcel and Sue Smith tells the story of Mrs. Travers meeting with Walt Disney as he tries to convince her of his vision.

Mrs. Travers (Emma Thompson) as she insists at being addressed as, has been refusing Walt Disney's attempts to make of movie of her film. Her literary manager encourages her to at least visit Disney as she is basically broke and needs the money to keep her beloved house in England. The fastidious Mrs. Travers arrives in LA complaining it smells like “chlorine and sweat”. Her assigned driver Ralph (Paul Giamatti) takes a whiff and doesn't get it. Meeting Disney (Tom Hanks) who tells everyone to call him Walt rubs Mrs. Travers the wrong way by calling her Pamela. He introduces him to his team, writer Don (Bradley Whitford) and composers Richard (Jason Schwartzman) and Robert (B.J. Novak) who are thrilled to have her on board. Mrs. Travers demands that they go over the script word by word with all their sessions being recorded. At the end of the movie a part of those sessions is played so y'all will realize that all this stuff actually happened.

In between the creating of the Mary Poppins the movie, there are flashbacks (a few too many) to Mrs. Travers difficult childhood in Queensland, Australia living with her alcoholic father, her ever suffering mom and her little sister. Her beloved father (Colin Farrell) encouraged her imagination that inspired Mr. Banks the patriarch in her story. It serves to explain why she wants to hold on to her story and not give in to Disneys interpretation that included animated penguins. Of course some of her demands are arbitrary and unreasonable like demanding no color red in the film.

Emma Thompson is as always spot on with her fidgety and cranky Travers. Her constant commentary fussing about everything from the donuts and snacks laid out for the writing sessions, to throwing the pears from the hotel gift basket into the swimming pool reveals a woman tightly wound. Hanks also vies for another Oscar nom with his Disney that sounds just like those moments on the TV show introductions with Mickey. Of course the music encourages one to go rent the original movie just revisit and see what all the fuss was about. And the magic of Disney slowly chipping away at the heart of Mrs Travers is what saves Mr. Banks.
(Review by reesa)