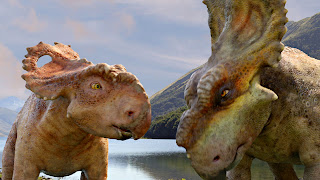 BBC Earth had a 1999 television documentary miniseries that movie is named after, directed by Neil Nightingale and Barry Cook, with a script by John Collee. It's set in the Late Cretaceous period 70 million years ago. The computer animated dinosaurs were added to the live action backdrop that was filmed on location in Alaska and New Zealand.

Alex (John Leguizamo) is a Alexomis bird that narrates the story about a three Pachyrhinosaurus who are Patchi (Justin Long), his brother Scowler (Skyler Stone) and their love interest Juniper (Tiya Sircar). The brothers are hatched on the mating grounds and Patchi is the more adventurous of the nest. He gets into trouble and ends up putting a hole in his head shield. It also makes it easier to tell who he is amongst the identical siblings. His brother is tougher and believes he will follow his father as the leader of the herd. Every winter the herd moves south and it's a huge change for the young dinosaurs. They meet up with dangerous carnivores, natural disasters, and personal tragedies. The characters go from young to full size in the story until they have to eventually fulfill their destinies in a predictable plot that is guaranteed to offer life lessons on growing up.

This movie is just perfect for those 10 year old dinosaur nerds who know all the correct spelling and pronunciations. The film helpfully adds factoids to each of the creatures featured. The animation is quite detailed and natural lending to the experience of when giants roamed the earth. The filmmakers wisely didn't make the animated characters “cute and cuddly”. Although they did made the characters slightly anthropomorphized to attract the younger kids but still retained a realistic version by not having the creatures smile or be humanized. Their mouths don't move to the dialogue as if it's the thoughts of the animals which is still aimed at the younger audience. The original plan was to make a stand alone virtual silent movie where you can turn off the soundtrack and still know what's going on. Interesting that they used Fleetwood Mac's “Tusk” for the migration sequence.

This is the perfect movie to give to kids when you have a day to kill during the holidays. It would make and even better TV series and the merchandising tie-ins will be on your store shelves or fast food kids meals. It's a visual treat for the parents so you won't be totally bored.
(Review by reesa)

Email ThisBlogThis!Share to TwitterShare to FacebookShare to Pinterest
Labels: Walking With Dinosaurs review