The Hobbit: Desolation of Smaug 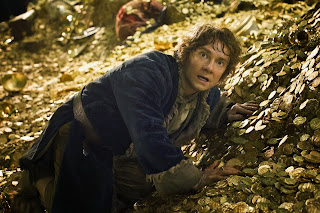 This is the year of sequels. Desolation of Smaug is the follow up to last years Hobbit: An Unexpected Journey. I will keep this review short only because Peter Jackson has made five of these, with one more on the way, so he should know what he is doing by now. Peter Jackson directs another beautiful, rich story in the place of Middle Earth. Could have there been some parts cut out? Sure, it does seem a bit long but overall it's still intriguing to see where these characters are going. I was invested from the gorgeous cinematography, special effects and fantastic story. The acting is on point as I thought, as well as the first, Martin Freeman who plays Bilbo is better in this one and really hones in on the character. He is also more of a badass in this one than the first. I like the first one but I loved this one and as usual Peter Jackson left it on a cliffhanger and have to wait another year for the last one. I have never read the book but I love the movies. This one is an epic, beautiful and rich adventure that would really tickle any fantasy itch that anyone has. You like the first? Go see it. You were underwhemled by the first? Then I think you will like the second one better as I did. What a great grand blockbuster in the middle of this terrible winter. 8/10
(Review by Chase Lee)