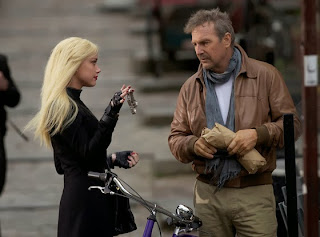 Kevin Costner has been slowly making a comeback to the big screen in the past few years with strong supporting characters in movies and a lead in an award winning TV mini series. Now with two big movies coming out in a couple of months of each other, he's set to become the new Liam Neeson. The premise of this new film from director McG (Terminator Salvation) is from a story by Luc Beeson (The Professional and the Transporter movies) which he wrote with Adi Hasak which seems like it's a rip off of Neeson's Taken, but not. There's a world created by movies where CIA black operatives are cool cold blooded killers who only get bad guys. There's plenty of action in this French/American production, along with family dramedy of a dying dad reuniting with his estranged teenage daughter.

Kevin Costner plays Ethan Renner, a cleaner with the CIA. His latest job is bungled when the bad guy gets away after he collapses when he gets his bell rung from a bomb explosion which is also exacerbated by previously unknown brain tumor. The doctors tell him he only has a couple of months and the CIA thanks him for his service. He goes to see his ex wife Christine (Connie Nielsen) to ask for time to spend with his daughter Zoey (Hailee Steinfeld). She will allow it but only if he promises that he is truly finished working. Of course that's not going to happen because Vivi (Amber Heard) with the CIA needs him to finish the previous job as he was the only one who can identify The Wolf (Richard Sammel). In exchange for his assistance, Vivi offers him an experimental drug that will give him more time on his ticking clock.

The story is infused with a bit of humor as Ethan trying to seriously reconnect with his daughter who calls him by his name instead of “dad” gives her bike (which she doesn't want), sizing up her boyfriend, and getting phone calls from her while he's interrogating suspects. Even having one guy give her a recipe for spaghetti sauce while duct taped in the bathroom. Ethan is not a bad man, considering he doesn't kick out the squatters he finds living in his apartment in Paris (apparently it's a law that you can't kick them out in the winter), and he asks for advise on raising daughter from a man he just tortured for information. Amber Heard who won the Shining Star Award at the 2010 Dallas International Film Festival is the cool CIA stiletto wearing boss to Ethan. She's droll and enigmatic and looks like she could have done the job herself so why does she have to drag in Ethan? Every time Ethan manages to corner a bad guy, he collapses from his condition and the after effects of the drug that Vivi injected.

As Hollywood action stars get older, we can probably expect to see more ageing actors show that they are not going to get farmed out to play character parts. Liam Neeson is also coming back next week with Non-Stop, and more Expendables will be hitting the screen soon. So if you like your action stars grizzled, road weary, don't care if the plot is filled with pot holes, like shots of Paris, and have nothing else to do this weekend, then this is the film for you.
(Review by reesa)

Email ThisBlogThis!Share to TwitterShare to FacebookShare to Pinterest
Labels: 3 Days to Kill review