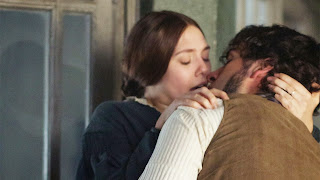 I am a sucker for films set in the 1800's but this one was ok. I have to give props on the directing of this film. The sets, costumes and the acting sold me on the era and that's all in the direction but I thought the story was eh. The story to me felt like a poor attempt of Romeo and Juliet. And at some points, don't get mad at me, it felt like a Lifetime movie. I realized I was in a theater and not watching something on my tv at some points. Some parts felt like a soap opera and I think that's why it reeked of television in some parts. I am also not knocking on the acting because the acting was good and I was intrigued by their performances. Elizabeth Olsen plays the main character we follow and she always does a good job. Tom Felton (from Harry Potter fame) does good but the one actor that really well is Oscar Issac. His character, in my opinion, had the best depth and you saw it unfold from the moment you saw him to the last moment you see from him. I thought his performance was hands down the best. The cinematography was well done and for the era its set in almost every shot will be colorful with costumes and beautiful lighting. I have always said its hard to mess up a movie set it the past in terms of cinematography. Because every shot should be filled with eye candy and great framing and this is no exception. The film felt like it dragged towards the end a bit and I sat wanting this movie to wrap up. It wasn't because I was bored but the story was just dragging and wanted it to just end in several places. So the editing could have been trimmed and maybe they could have tricked me in thinking the film was better paced. I had a good time with this film, a bit more than I should have, but the story felt dated and just mediocre at best. 6/10
(Review by Chase Lee)