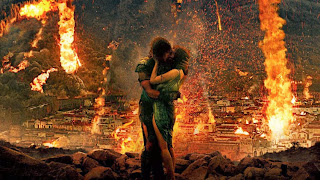 Ok I have to confess something. I really like the Roland Emmerich films on disasters. I really enjoyed The Day after Tomorrow and 2012 but I did not enjoy this one. I will keep this brief as you guys can already tell this movie is going to be bad. This was an unnecessary movie about this terrible disaster and sticking a cheesy romance story in it. It was like Titanic with lava and I love Titanic but this is terrible. Paul W.S. Anderson has proven to us once again he is a bad director. His over the top action and terrible dialogue bleeds into this as well. This is the same guy who did Mortal Kombat: Annihilation and all the "awesome" Resident Evil movies. But unfortunately every movie he makes engulfs large wads of cash at the box office. The acting is mediocre at best. The cinematography is cool in some parts but is filled with CGI and there were some shots where it looked like a green screen and took me out of the movie. The actual volcano eruption was cool but towards the end I just wanted it to be over. If you like 3D disaster movies this is for you. I just never got into it and this is coming from the guy who liked John Cuscak driving a limo through destruction in the movie 2012. 4/10
(Review by Chase Lee)