A Fault of Our Stars and Cast Interview 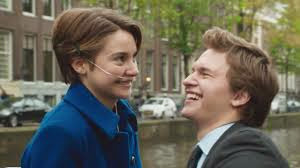 Going into this movie I knew I was going to cry like a little child and I did. This is genuine, emotional and touching story that teenagers and adults will both love. This is an adaptation of a book of the same name and I knew nothing except this was a wildly popular book for teenaged girls. So you can see why I was cautious, however this was very surprising. The screenplay was adapted by the same writers of 500 Days of Summer and The Spectacular Now, also an adaptation, and they always do a fantastic job writing realistic and impactful dialogue and this one is no exception. The direction of this film, done by Josh Boone, takes this script and pulls the best performances out of the actors and actresses. The acting felt so raw I actually thought these characters were real and thats always a good sign of a good director. The acting is especially strong from the leads. Shailene Woodley and Ansel Elgort give touching performances and depth to their characters to where at some point we can all relate even if you don't have cancer. I haven't seen enough from Elgort but, in my opinion, this is the best I have seen Woodley (and I really liked her in The Spectacular Now). The supporting cast does well but Elgort and Woodley are in almost every scene together and you can't but help to love these two as a couple. Their chemistry is just that good. The cinematography is nothing to brag about but I did find it a breath of fresh air when the movie shifted to Amsterdam. It was a nice change of scenery from the same town the film takes place in. The film is a little over two hours long and I have to tell you I was never bored. This rarely happens, but I was sucked in as soon as the first frame opened. I can't express how much I loved this movie. I did have a few issues with it mainly being some of the dialogue and the tone within certain scenes but ninety-nine percent of the script is golden. This is a great story for kids and adults no matter how emotionally draining. This is just a good, raw story and it's best to know as little as possible before seeing it. You will cry so bring the tissues. And if you are a man and your wife/girlfriend drags you to this it's ok to cry gentlemen and no one will make fun of you...except that twelve year old girl sitting in front of you. But seriously it's ok. A strong 8/10
(Review by Chase Lee)

Email ThisBlogThis!Share to TwitterShare to FacebookShare to Pinterest
Labels: A Fault of Our Stars review, Cast Interview, Chase Lee