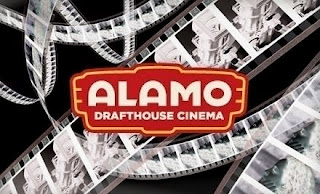 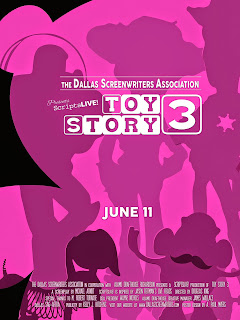 The Dallas Screenwriters Association (DSA) is proud to feature Toy Story 3 as the third screenplay to be read during its ScriptsLIVE! shows, returning to the Alamo Drafthouse Cinema – Richardson Wednesday June 11 at 7 pm. The screenplay, written by Michael Arndt, was nominated for Best Adapted Screenplay in 2011.

The first two ScriptsLIVE! shows were performed in front of a full house with every seat in the ADH 73 theater filled with excited audience members.

ScriptsLIVE! is a dramatic reading of a classic screenplay in front of a live audience. The professional actors, seated in director’s chairs, present the material with a fresh read providing the audience with a new take of a popular film. Behind the cast of local actors will be projected establishing shots to set the scene.

Screenwriter Michael Arndt, known for The Hunger Games: Catching Fire (2013), Oblivion (2013) and Little Miss Sunshine (2006) wrote the screenplay for Toy Story 3 based on a story by John Lasseter, Andrew Stanton and Lee Unkrich. The screenplay took 2 1/2 years to write and storyboard.

FEATURING TALENTS
The entire cast is from Dallas/ Fort Worth. Woody will be played by Chester Maple (Avenue Q), Buzz Lightyear will be played by Lance Eakright, (Salem, Human Wreckage and Issues), Jessis will be voiced by Lara Woodhull (voice actress for FUNimation Entertainment) and Lotso will be voiced by returning ScriptsLIVE! actor Troy Randall Smith (S/A/T/X and Faisal Goes West).

The remaining ScriptsLIVE! shows for the year (held every other month, always on the second Wednesday of the month) include Groundhog Day and Back to the Future.

The event is free to attend with a reservation.
http://drafthouse.com/movies/scriptslive-toy-story/dfw

Posted by Dallas Movie Screenings at 11:03 AM

Email ThisBlogThis!Share to TwitterShare to FacebookShare to Pinterest
Labels: ScriptsLIVE! Toy Story 3 at the Alamo Drafthouse