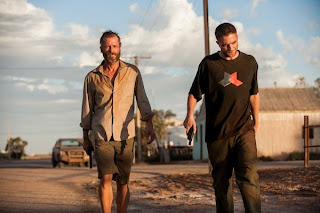 Director/writer David Michôd who did the amazing Animal Kingdom in 2010, has taken his story with Joel Edgerton that once more mines a violent vein in the Australia outback. The feeling of the film is somewhat Mad Max and the Road Runner in a nihilistic future when the global economy has failed, people speak Chinese, and the American dollar is the only accepted currency.

Guy Pearce who never disappoints is brilliant as Eric, who while nursing a drink at aloud karaoke bar, doesn't see a speeding truck fly end over end outside the window. The bad guys having climbed out of their stuck truck quickly commandeers Eric's Peugeot and speeds down the road. Eric manages to get the crashed truck going and follows them. The trail leads him to small towns that could have been in a David Lynch movie. Dialogue is terse. Eric obviously lost the need to form complete sentences, or even care only saying “I want my car back”. He gets a gun from a midget in what may be a whore house, but when negotiations gets too complicated he just shoots the midget. He encounters Rey (Robert Pattinson) who is gut wounded but had managed to make his way to the small town where he finds his brother's truck. Henry (Scoot McNairy) had him involved with some nefarious dealings and the job went south. He and his gang presumed he was killed in the shoot out and left him for dead. Eric decides to use Rey into getting him to where his brother is hiding out. But first takes him to the only medic in town, Dot (Susan Prior), who seems to be the only normal person in this dry dusty, bleak world before Eric's troubles follow him there.

Pattinson proves that he can be more than just a sparkling vampire with angst by his portrayal of the simple minded young man with yellow teeth and an overkill mumbling southern accent that seems to come and go. Not knowing any world beside the one they are in, he tries to forge a friendship with Eric when he realizes that his brother abandoned him. Eric who has sealed his emotional self away seems to break down towards the naive young man. It doesn't stop him from his obsessive journey to retrieve his car. The film is tense and remorseless with the heat steaming off the screen. You can feel the grit on your teeth from the dust. It's a chilling film that that doesn't make you feel any sympathy for it's characters. Just mad crazed violence of a world that's possible in our future.
(Review by reesa)\

Email ThisBlogThis!Share to TwitterShare to FacebookShare to Pinterest
Labels: The Rover review