Supermensch The Legend of Shep Gordon 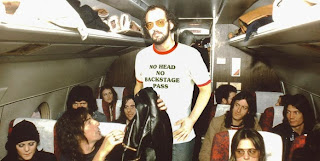 Shep Gordon is the stereotypical image of a Hollywood super agent. His rise to fame is directed by Mike Myers who began their friendship in 1991 when Myers wanted to use an Alice Cooper song in Wayne's World. Cooper was one of Gordon's first clients. This film is an homage to the entertainment maverick with an intimate and amazing look at the career of a unique individual. Big names celebrities offer their two cents on Gordon who was described to be like the spawn of Brian Epstein and Mr. Magoo.

Shep started out wanting to be a probation officer. But this was the late 60's and long hair was not quite the image for this type of work. He gave up that dream and went to Los Angeles where he drops acid at his motel and has a fortuitous meet with Janis Joplin and Jimi Hendrix. According to Gordon, it was Hendrix who thought because he was a Jewish stoner he should be an agent. Hendrix suggested he come talk to some friends of his who needed someone to manage the band. The band was Alice Cooper. Despite Gordon not having any experience doing this kind of work, he manages to propel Alice Cooper to fame with some gutsy and clever marketing. All of this happening during the hey day of sex, drugs and rock and roll.

Gordon while living the crazy party filled life of a successful agent took on Anne Murray, a normal looking and sounding folk singer from Canada, so far and away from the insanity of Alice Cooper. He managed to elevate her career by making sure her picture was taken with some well known famous people like John Lennon. Later he went on to represent Pink Floyd, Teddy Pendergrass and Luther Vandross. With Pendergrass he broke him out of the Chitlin' Circuit where most black performers were forced to perform. He put him in women only concerts that were wildly successful with Pendergrass's romantic voice.

Not only did he manage talent, but he also produced movies such as The Whales of August, The Moderns, Far North and They Live. What is more surprising and probably not as well known is if it wasn't for Gordon's exploration of his culinary skills there would be no celebrity chef. He managed to make big named chefs into brands that helped start the Food Network. He also used his cooking skills to share dinners with well known friends at his Maui beach front home. Celebrities such as Michael Douglas, Sylvester Stallone, Tom Arnold, Emeril Lagasse, Willie Nelson and Alice Cooper all offer teasing tidbits about Gordon who seems to be well liked within the industry.

Now at 68, he remains in Maui, still looking for love. Although he never had time to make his own family, he managed to create one from the grandchildren of an old girlfriend. And his friends remain close, especially Alice Cooper who he's managed with for 43 years, and never had a contract with him. This is a love note to a truly interesting character in a movie that is somewhat indulgent, but will make you smile.
(Review by reesa)

Email ThisBlogThis!Share to TwitterShare to FacebookShare to Pinterest
Labels: Supermensch: The Legend of Shep Gordon review