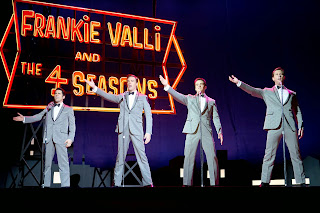 Anyone who grew up in the 60's would be familiar with the harmonizing vocals of The Four Seasons. Their music was counter to the British invasion being the perfect American sound that everyone could dance to at proms and American Bandstand. Based on the 2005 Tony Award winning Broadway musical, the script by Marshall Brickman and Rick Elice is directed by Clint Eastwood who keeps the feeling of the stage play throughout the film. A lot of the film is weighted down by cultural stereotypes of East Coast Mafia types which serves as the colorful background of the band.

Tommy DeVito (Vincent Piazza who looks a little like Robert Pattison) plays the fast talking leader of the group. He is looking after the teenage Frankie Castelluccio (John Lloyd Young) and lets him sing with the band some nights. Tommmy is the driver for a local gangster Gyp DeCarlo (Christopher Walken) who takes a shine to Frankie and his voice. Sensing a more stable, level headed young man, Gyp becomes a bit of a mentor for Frankie. The film covers the rise of Frankie and the band which doesn't take off until they hire Bob Gaudio (Erich Bergen) who had written one hit called Short Shorts. He's also college educated and business savvy managing to get a contract between himself and Frankie for the song rights. Bob writes their first big hit Sherry that was a number one hit.

The best part of the movie is of course the music, which features the sound alike falsetto of the real Frankie Valli. In fact the The Seasons are portrayed by the same actors who played them on stage. The story covers all the important landmarks of the group like finding their name from a bowling alley marquee, How their producer Bob Crewe (Mike Doyle) who does the token gay character in the movie records their music. The rise and fall of Frankie's marriage to Mary (Renée Marino). What the long endless nights of the concert circuit does to the family unit. There's Tommy's mismanagement of bands' funds that gets him kicked out the band. Then Nick Massi (Michael Lomenda) walks away from the band right before a big concert tour. Frankie is once more having to re-invent himself while digging out of Tommy's debt.

All the little dramatic flourishes is really not what will bring you to this film, despite Eastwood sort of serviceable direction. The movie is mostly about the music which is a great nostalgic ride of favorite hits like Big Girls Don't Cry, Walk Like a Man, My Eyes Adored You, Dawn, Can't Take My Eyes Off You and Rag Doll. All the songs are there and you will be singing them as you walk out of the theater.
(Review by Reesa)