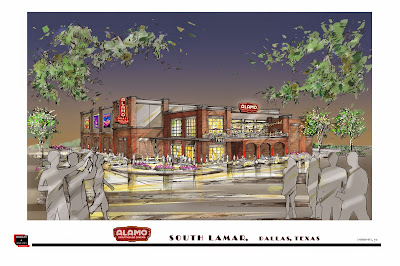 
Dallas – July 8, 2014—Alamo Drafthouse Cinema is pleased to unveil plans for a second location in North Texas. The eight-screen theater, and Glass Half Full Taproom, will be owned and operated by Two is One, One is None LLC, the DFW franchise partner of the Alamo Drafthouse that also owns the Alamo in Richardson. Alamo Drafthouse Cinema will become a part of the South Side Lamar District, joining the NYLO Hotel, SODA bar, The Cedars Social, Gilley’s, Full Circle Tavern, Southside Ballroom, Terrace Bistro, Opening Bell Coffee, Poor David's Pub and Bill’s Records. The theater will open mid-2015 at the Southwest corner of South Lamar and Cadiz Streets in Dallas – halfway between the new Omni Dallas and the award-winning South Side on Lamar.

“We’ve had our eye on a South Lamar location since entering the North Texas market. Everything about downtown and South Dallas dovetails perfectly with the Alamo brand. The convergence of Chef-driven restaurants, food trucks, craft breweries, the Arts District, and homegrown/local retail are all complimentary characteristics of Alamo culture and lifestyle. Another exciting aspect is the partnerships we can form with local entrepreneurs. In Richardson, we’re already partnering with local businesses like Dude, Sweet Chocolate, Oak Cliff Coffee Roasters and various breweries; Community, Deep Ellum, Four Corners and Peticolas to name a few. Now we can expand these relationships and form new ones with a location in the heart of Dallas,” said Bill DiGaetano, Alamo Drafthouse DFW Owner and COO.

Jack Matthews, president of Matthews Southwest, welcomes Alamo Drafthouse to the South Side/Cedars area. “We are very pleased that Alamo Drafthouse will open in the South Side area, it gives both residents of Dallas and visitors another excuse to enjoy themselves and the city. Living in a city is about choices you can get to quickly: dinner, drinks, a movie or a great view. This will be a place for all of that. The South Side really enjoys the best views in the city and the deck here [at Alamo] will be in serious competition with the NYLO SODA Bar and the pool deck on the Omni. Mayor Rawlings’ GrowSouth vision is quickly becoming a reality in the South Side/Cedars area.”

Alamo Dallas Details
Alamo Drafthouse Dallas will be a state-of-the-art theater with 8-screens and just under 1,000 seats. Each auditorium will be equipped with the latest in 4K digital projection with larger-than-average screen size to room ratios and 7.1 Dolby Surround Sound. Select auditoriums will also feature 35mm projectors for Cinephiles to experience classic and repertory content as they were meant to be viewed. Not only will they feature superior audio-visual equipment, additionally the format of each theater will eliminate the traditional front row, ensuring every seat in the theater allows for an optimal viewing experience.

In addition to in-theater dining, Alamo Dallas will feature a second level Glass Half Full Taproom with two patios and a panoramic view of downtown. The Glass Half Full Taproom and patios will have seating for 200 people and feature an extensive menu of 32 craft beers on tap; over 35 bottled beers, wine, cocktails and freshly made food. The lounge will offer patrons an inviting place to socialize whether waiting for a movie or simply coming to sample scratch-made menu items, cocktails or local craft beers. Antique brick salvaged from other buildings in the South Side area will be used both inside and outside of the theater as homage to the great history in downtown Dallas.


What Sets Alamo Drafthouses Apart
Alamo Drafthouse combines dinner, drinks, films and events, all under one roof. The theaters have been heralded for their unique programming events and high exhibition standards, earning accolades like “Best Theater Ever” (Time Magazine) and “the coolest theater in the world” (Wired).

Alamo Drafthouse provides a unique combination of theater and restaurant, showing first-run movies, independent films and special programming events with an extensive menu made from scratch in a state-of-the-art culinary kitchen. Customers order food and drinks from servers who quietly attend to them throughout the movie.

Customers are encouraged to arrive early to enjoy the pre-show entertainment. Instead of a barrage of advertising, the Alamo shows a curated collection of rare and humorous clips. “We're proud of the fact that we don't show any advertising,” Tim League said. “People don't want to pay for a movie and then be bombarded with 20 minutes or more of shampoo commercials. If you don’t like the movie, we strive to produce a pre-show good enough to still make for a great experience.”

Alamo Drafthouse protects the theater experience with a zero-tolerance policy for people who disrupt the film with talking or texting. Alamo Drafthouse was featured on global news for a viral “Don’t Talk” PSA that used a humorously misguided voicemail from an actual patron who was ejected for using her phone during the film. The full story on the long tradition of Alamo’s no talking/texting policy can be found here: http://cf.drafthouse.com/she_texted_we_kicked_her_out2.html