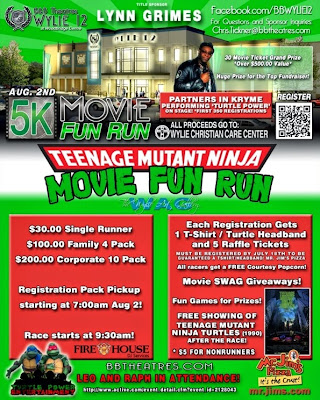 No decade has shaped pop culture quite like the 1980s.

1982: E.T. The Extra-Terrestrial lands in theatres

1983: The Cabbage Patch phenomenon crops up

The Turtles dominated the media landscape through the late 80s and early 90s, culminating in multiple feature films, a hugely successful animated television program, action figures mania, and much more. While these collectibles and throwbacks yank at the heartstrings of nostalgic Babies of the Eighties, the future looks bright for the Boys in Green as Paramount Pictures prepares for the upcoming release of the revitalized and reimagined Teenage Mutant Ninja Turtles (August 8).

B&B Theatres Wylie 12 with Marquee Suites celebrates the exciting return of the Turtles to the big screen, but acknowledges that the bodacious potential of the future is contingent upon understanding the radical contributions of the past. To herald in the new feature, B&B Theatres in Wylie is hosting the first ever Teenage Mutant Ninja Movie Fun Run, a Turtles-themed 5k held on August 2nd. Participants will receive t-shirts, tubular turtle headbands, and raffle entries for great prizes, not to mention the chance to get the shell off the sofa and enjoy some good, ol’ fashioned exercise.

But that’s not all!

All participants will be invited to attend a free showing of the classic 1990 Teenage Mutant Ninja Turtles film. Sound awesome? It will be. The only thing that could make it better would be watching the film with the Turtles themselves….WHICH WILL BE POSSIBLE since all four turtles will be in town to support the race and take pictures with any eager turtle fans, keep the Foot Clan at bay, and share a slice with their fans. (Turtles courtesy of Turtle Power Entertainment) No turtle event would be complete without the essentials, and by essentials, we mean PIZZA! Everyone that joins us for the race will get a piece of Mr. Jim’s pizza before watching the movie on our MASSIVE GRAND SCREEN!

We will also have on site the foremost expert on Ninja Turtles with YouTube Sensation Andre Meadows of ‘Black Nerd Comedy’! With over 250,000 subscribers, many people are eager to learn about his thoughts on anything turtle related! The Allen American’s hockey team will be joining us with a Casey Jones ‘Slapshot Challenge’ and we will have David DeGrand (Artist for Mad Magazine and Spongebob Squarepants) drawing free sketches for all kids! The event is not just for adults as we will have a FREE Turtle Trot for Kids 11 and Under at 9am before the festivities kick off!

But the icing on the cake (or pizza, if you prefer) is the exciting news that PARTNERS IN KRYME will make a rare appearance to perform the classic anthem “TURTLE POWER” and a never-before-released new track, “ROCK THE HALFSHELL”. Not only will PARTNERS IN KRYME be performing their new song, but everyone in the auditorium will be A PART OF THE MUSIC VIDEO! Couple this with additional games and events, good food, great friends, and the fact that ALL proceeds go to benefit the Wylie Christian Care Center, and you’ve got a recipe for a turtle-tastic event that will be sure to let Shredder and his goons know that TURTLE POWER is alive and well in Wylie.

ALL proceeds will benefit the Wylie Christian Care Center.

B&B Theatres is the 19th largest theatre chain in America and operates 233 screens in Missouri, Kansas, Oklahoma, Texas and Florida. Other B&B locations in the area include Colleyville, TX and Oklahoma City, OK. B&B Theatres’ corporate office is in Liberty, MO (Kansas City area) and has an additional office in Los Angeles, California.

B&B Theatres has been family owned and operated since 1924 when Elmer Bills Sr. opened a movie house in Salisbury, Missouri. The future Mrs. Bills played the piano for silent movies. During the company’s 89 years and four generations of family involvement, it has seen the coming of sound, color, Technicolor, stadium seating, multiplexes, and now digital cinema.

For More information about B&B Theatres,

Posted by Dallas Movie Screenings at 8:28 AM