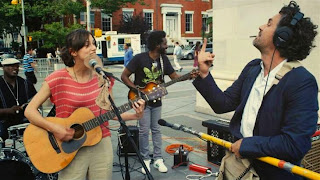 Director/writer John Carney who brought the magic of urban street musicians in the Oscar winning Once, is back with another romantic tale this time set in New York City. The music is pleasant, and folksy, but doesn't leave a lasting impression as it did in Once with Glen Hansard and the Swell Season. The music by Gregg Alexander features work by song writers Danielle Brisebois, Nick Lashley, Rick Nowels, Nick Southwood, John Carney and Glen Hansard. While this movie is not exactly a rom-com, it does offer a light and genuine friendship of the two leads as they save each other through the music.

Mark Ruffalo, looking a dishevelled as the alcoholic record executive, Dan Mulligan, is being kicked out of the company he helped start. Feeling sorry for himself, he's been drinking all day, even trying to get his estranged teen daughter Violet (Hailee Steinfeld) to pay for his beer tab. While still spiralling down, he hears an open mike performance by Greta (Keira Knightley) who was forced on stage by her busker friend Steve (James Corden). The audience is barely paying attention to her as she lacks stage presence, her song is a bit mopey, and she's dressed like a tomboy. But to Dan, he hears a that certain “something”, even imagining in his booze filled mind, the other instruments and the possibilities from her raw talent. He immediately offers her a chance to make a record.

Greta was planning to go back to England, having come to the states with her boyfriend Dave Kohl (Adam Levine) who is just exploding on the music scene, and promptly has an affair that he wants time to explore. She decides to take this chance, even though Dan doesn't really have the resources from his old company to make it happen. They decide they will produce it on their own, recording all over the city using alleyways, rooftops, subway stations, and parks as their studio. They hire students, street kids, and with the help of Trouble Gum (CeeLo Green) who knew Dan in his better days, some real musicians as the band. The freshness of the city tour and the excitement of the guerrilla recording gives the movie some energy. It's the filler between, like walking around the city listening to playlists from earbuds, or the love/hate/frustrated relations with Dan and his ex-wife Miriam (Catherine Keener) or the uncomfortable teenager and daddy issues, make the movie a bit contrived. Greta getting her comeuppance with Dave is a little bit more satisfying.

Knightley does her own singing in the film and although nice to listen too, lacks the passion from the music in Once. She infuses the movie with a bright and positive energy that is brought alive by Dan's encouragement and in turn transforms Dan. The other theme of the film seems to touch on the flash trappings of the digital age with musicians being marketed like over produced products. Old school music like Dan's vision where the songwriting and performance is being lost to corporate manipulation as in Dave losing touch with his own music.

Considering the number of blockbuster choices at the theaters, it's nice to have a feel good movie that will leave you with a smile.
(Review by reesa)