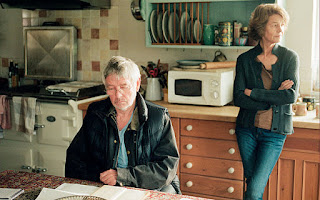 Opening:
Thank you 45 Years for making me question getting married. Well, my dating life isn’t that extravagant in the first place but that’s beside the point. This is a scary film on marriage and what it means to love someone, especially when you realize the person you married has been hiding something. Let’s get reel and break this down.

Plot:
A married couple preparing to celebrate their wedding anniversary receive shattering news that promises to forever change the course of their lives.

Pros:
Director Andrew Haigh brings us a self-contained story about marriage and shows us the terrifying nature of when someone’s trust is shattered. It plays like a horror/thriller and drama all at once really showing emotional range in terms of the story and its characters. The story is engaging and you want to know how this will end and what will happen to this couple.

Cons:
The writing is ok, but nothing special. However, this is the one major issue I have with this movie and that is the husband. He comes off as a selfish and extremely unlikable person to a point where it felt like he just didn’t care about his wife and what she was going through, even though I knew where he was coming from and how he was feeling. I don’t spoil anything so it’s hard to explain and I have to dance around it.

Pros:
Despite the unlikable character, I enjoyed everyone in this film. I felt the raw intensity, love, anger, and fear from Charlotte Rampling and Tom Courtenay’s portrayal of a marriage. It was very well done and felt natural. Rampling is the standout and her facial expressions alone sell her performance and what her character is going through. The final shot left me in goosebumps.

Pros:
The way its shot has a rustic charm of the couple’s house and adds an eerie setting considering it’s out in the middle of nowhere, adding to the story of isolation. There also a few shots, as stated above, that add a creepiness factor to it going into that horror/thriller category.

Pros:
When the “turn of events” happens, the film really picks up and I became more invested in the characters. Overall, it does have a nice pace to it and it flies by with a run-time around an hour and a half.

Cons:
It does have a slow start, which doesn’t bother me, but it takes a bit to get going with the hard-hitting drama.

Overall:
This is a haunting film about trust, love, and marriage, but the average dialogue, unlikable lead character, and slow start makes this film good not great for me. I still recommend it.