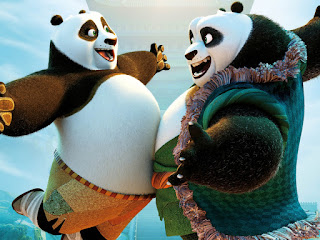 The third of the animated series that began in 2008 set in a wuxia genre of ancient China continues the story of the giant Panda who was prophesied to be the Dragon Warrior. The acclaimed movies have been nominated for the Academy Award for Best Animated Feature. Director Jennifer Yuh Nelson who directed the 2nd film is back at the helm with Alessandro Carloni from a story by Jonathan Bibel and Glen Berger who also wrote the last two movies. It's packed with visual candy and the great voice talents that make this such a beloved adventure for children and adults.

Po (Jack Black) always believed he was the last Panda on earth having been raised by his goose father Mr. Ping (James Hong) at this noodle shop. One day Po meets his biological father Li Shan (Bryan Cranston) and discovers that there are other pandas living in a secret village. Mean while there is an evil spirit Kai (J.K. Simmons) who wants to steal the powers of all the kung fu masters. He can manipulate the physical bodies of the defeated masters into jade warriors or “jombies”. He captures the chi of Master Shifu (Dustin Hoffman), Mantis (Seth Rogen), and Crane (David Cross). Po discovers that Master Oogway (Randall Duk Kim) had banished his once brother in arms, Kai to the spirit realm when his friend became obsessed with gathering all the chi in the world. Pandas were once the master of chi, and when they were attacked Po's mother hid him and they were separated. Now Po must return to his home and master the power of chi to battle Kai. It would have been all fine and good, but the panda's in the village pretty much forgot their legacy. Tigress (Angelina Jolie) and Viper (Lucy Liu) track down Po to tell him that Kai is on his way. They have to get the village ready for attack, and that means making everyone into kung fu pandas.

The bright artwork and colorful effects are the work of DreamWorks Animation and Oriental DreamWorks with one third of the work being made in China. It makes sense that there is a certain authenticity to the understanding of Chinese culture and heritage that informs the film. At the same time the creatures who inhabit this world are lovable and quirky. The pandas love to eat and Po realizes he has to live up to his potential. He discovers that panda's don't use chop sticks because it slows them down when eating. Stand out Mei Mei (Kate Hudson) as Po's love interest is a bit of a diva, but in a good way. The film also touches on nature vs. nurture as Po's two father's come to terms to how they fit in Po's life. The core lesson is to 'be the best you can be'. Hopefully this won't be the last of Po's adventures.
(Review by reesa