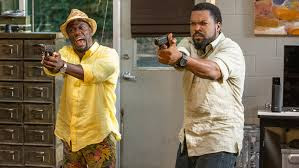 Opening:
From the director of the critically acclaimed Fantastic Four (2005) & Fantastic Four: Rise of the Silver Surfer, comes the most talked about sequel since the release of The Dark Knight. Ok, not really. Excuse me, folks; my sarcasm is showing. Let’s get reel and break this down.

Plot:
As his wedding day approaches, Ben heads to Miami with his soon-to-be brother-in-law James to bring down a drug dealer who's supplying the dealers of Atlanta with product.

Pros:
Technically, this isn’t a badly directed film. The action set pieces are ok, at best, and the constructs of the actors and their scenarios are entertaining like most buddy cop movies. However…

Cons:
The writing is very generic and doesn’t add anything new to the buddy cop genre. The writing almost feels like someone went to Walmart and dipped their hands into the five dollar bin, pulled out a random movie called Buddy Cop: The Movie, studied it, and made the jokes even lazier in this movie. There are certain elements of the story that are fixed in a matter of minutes and there is no gravitas to the characters or story. It’s extremely basic and I didn’t find the jokes at all funny.

Pros:
The actors got paid and it seems like they had fun shooting it? I will watch anything with Ice Cube because he is the most entertaining grumpy actor since Clint Eastwood.

Cons:
Listen, is anyone unbearable? Not really, but it was so average across the board that no one stood out. The hero, villains, love interest etc. were so bland. Listen, I am fan of Kevin Hart but he is starting to wear on me just a bit.

Pros:
The action scenes were cool, I guess if you haven’t seen any action film ever.

Cons:
The one problem I have noticed with a bunch of Universal films, I recently watched Kickass 2 again, is that some of their movies have that extreme soft lighting where everything is evenly lit and looks like a set. Ride Along 2 falls into that category. Maybe it’s their comedies, but they have to light it a tad more professionally with some creative spark and not like they are on a soap opera.

Cons:
There was an alligator in one scene that was so bad that I was baffled that a sequel, with a supposed bigger budget, had a special effect that looked like someone made it in Window’s Paint in 1993. The overall flow of this film is running at a snail’s pace. I didn’t find any of the jokes funny so my experience was a lot longer than most.

Overall:
Listen, if you liked the first Ride Along, you will probably like the sequel. I never saw the first one; however, I didn’t think was the worst thing I have seen. It was entertaining ever so slightly that it was miles better than Daddy’s Home, so that might be why I won’t give this a terrible score. This is about as generic as buddy cop movies come.