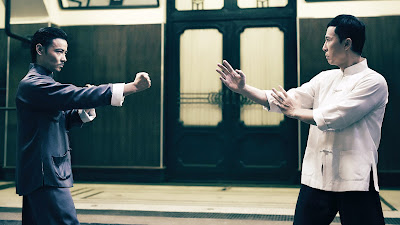 Wing Chun is a form of martial arts that was originally created by a woman, but over the years it has developed to become highly regarded around the world and popular with foreigners due to the late actor Bruce Lee. But before Bruce, there was his teacher, Ip Man. The first two movies of this series tell of his time in Foshan, the Sino-Japanese War, and his days in Hong Kong where he established his school. If you haven't seen the previous movies, it's highly recommended, but really not necessary to enjoy the latest. Wison Yip who also directed Ip Man 1 and Ip Man 2 is back at the helm with Yuen Woo-Ping (The Matrix, Crouching Tiger Hidden Dragon) as the action director. The first Ip Man was not only earned 12 nominations at the Hong Kong Film awards, it currently is the highest grossing Hong Kong films to be released in the country.

The story begins in Hong Kong 1959 where Ip Man(Donnie Yen) has settled in a nice stable life with his wife Cheung Wing-sing (Lynn Xiong) and their younger son Ip Ching. Ip Man meets Bruce Lee (Danny Chan) who asks to become his disciple. The producers wanted to CGI Lee's face on the actor, but could not get permission from his estate. The actor does a credible performance with the cocky attitude that is Bruce Lee. One day, the young son Ip Ching gets in trouble with another boy at school. Cheung Fung says that his father Cheung Tin-chi (Max Zhang) is also a practitioner of Wing Chun. The single father is a rickshaw puller trying to earn enough money to open his own school. He also fights for extra cash at black market boxing matches run my Ma King-sang (Patrick Tam) a local triad leader. His boss is Frank (Mike Tyson) an unscrupulous real estate tyrant. He sends King-sang's men to get the principal at the school to sign over the property. Fortunately Ip Man shows up to help dispatch the thugs. He seeks the help of his friend and police detective Fatso (Kent Cheng), who can't do anything because his British boss is in cahoots with Frank.

There are some amazing fighting scenes as Ip Man confronts Ma and multiple thugs while Ip Man and his students protect the school. He also sees the skills of Tin-chi who aids preventing the principal getting kidnapped. Later Ma gives Tin-chi lots of money to carry out a job hurting Master Tin (Leung Ka Yan), Ma's old teacher. Later, Ma tries to kidnap some of the students in exchange for the principal, but it's Ip Ching and Cheung Fung who are captured earning the ire of their well skilled fathers. There's an amazing battle sequence involving shipyard workers with Ip Man and Tin-chi fighting a never ending supply of bad guys. Frank sends a Thai fighter to take out Ip Man, which he does in an elevator while protecting his wife. Finally Ip Man decides to confront Frank and we see Tyson and Yen tough it out. The previews make a big thing out of their confrontation which seems a small part of the overall movie. It is almost like it's just something that Ip Man scratches off his list of things to do that day. It doesn't mean that it's not exciting. It's a very visually stimulating clash of fighting styles.

The final confrontation is between the Tin-chi who wants to become the Grandmaster of the traditional Wing Chun martial arts faction. The prideful Tin-chi and the cool calm Ip in a meet at the bequest of Ip's dying from cancer wife is one of the best so far. They use poles, knives, and fists. They both seem evenly matched. At the end, Ip Man tells him that nothing is more important than having your love by your side. At times the movie is floating too many plot lines, and not enough resolutions between the fighting sequences. Ip Man is so laid back at times, he doesn't seem to break a sweat when he's working it. The script by Edmond Wong is serviceable but somewhat pedestrian. The real heart of the story, is Ip Man's devotion and love to his wife. This is a good reason to go see the first 2 films to understand the chemistry between them.
(Review by reesa)