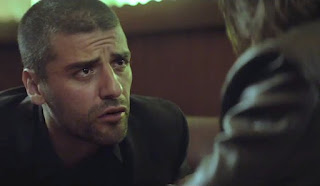 Opening:
The definition of a made for TV movie is exactly what this is. This is a perfect thriller for Lifetime on a Tuesday afternoon. It’s about as average as it gets, which is not a bad thing. However, let’s get reel and break this down

Plot:
A suicidal artist goes into the desert, where he finds his doppelgänger, a homicidal drifter.

Pros:
From writer/director, William Monahan, writer of such films as The Departed, Body of Lies and Edge of Darkness, brings us an engaging film and heightens our curiosity on how this will end where are characters are going. But…

Cons:
…the writing and story in particular are where the problem with this film lies. The writing is a toss-up. It’s good and enticing in one scene but then in others it feels long winded and a bit self-indulgent. It didn’t know what it wanted to be and kind of felt incoherent sometimes with tone and plot. For the story, I am not going to lie, was a waste with many scenes that felt like they were in a different movie. As for the ending, I have seen it in other movies and, ultimately, I didn’t see the clear goal for the main character. I feel like if I say anymore I will go into spoiler territory, and I don’t do that here no matter how average or terrible the movie is.

Pros:
Surprisingly, everyone does a great job. Oscar Issac is terrific as this gross, creepy drifter and Garrett Hedlund was great as this great representation of how some people act in the film industry. I loved their back-and-forths, even when the dialogue felt too long sometimes

Cons:
The supporting cast, while good in their performances, felt wasted and honestly didn’t see the point with the overall story. There is a surprise actor as one of the supporting roles that caught me off guard and they were entertaining to watch. And while Hedlund did a good job, I didn’t care for his character, since he was kind of an A-Hole, so I didn’t really care about his family or reasoning’s for the actions he did.

Pros:
This is a well shot movie with some good desert shots with a feeling of isolation to creepy, almost Hitchcock like, shots when they are back in the city.

Pros:
Once the movie gets going it is intriguing, even with its bland ending.

Cons:
But, it took a while to get going, and if I am honest, I wasn’t locked in until Oscar Issac comes on screen. He is always my favorite part of every film when he is surrounded by a great cast.

Overall:
This is an average thriller but has some major story problems, emotional weight, and incoherent and unanswered plot points. But if you want to be surprised by a movie ending, I guess this is a movie that will make you want to go back and re-watch it for hints and clues to the puzzle after the fact; however, I won’t be revisiting it, one time is enough for me. You can check it out on VOD, that would be the choice I would tell you to watch it in and not in the theaters unfortunately.

Posted by Dallas Movie Screenings at 9:56 AM