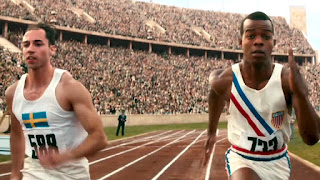 With the upcoming Summer Olympics coming, it's a perfect time for a biopic about the great African American athlete Jesse Owens. Supported by the Owens family, the Jesse Owens Foundation, the Jesse Owens Trust and the Luminary Group, the new film directed by Stephen Hopkins hits the screen with an inspirational story. The Owens family had final script approval to make sure that the writers Joe Shraphel and Anna Waterhouse stuck to the facts. The film not so subtly suggests some comparisons from the racism that Owens faced not only in his school but from the Nazi's at the Olympics, that unfortunately still persists to this day.

Stephan James plays Jesse as a young man who is heading to college wearing a nice jacket made by his mom and the pride of his father. He leaves his poor small home promising to marry his girlfriend Ruth (Shanice Banton) and their three year old daughter. Ohio State University's track team was having a bad couple years with their new coach Larry Snyder (Jason Sudekis), who notices the running times of Jesse then offers him a chance to possibly aim for the 1936 Olympics. The film covers the struggles of dealing with having to listen to the hostile attitudes of the racist students and teachers. Jesse is also trying to earn money working at a gas station and fit in his practice and studies. Snyder and Owens build a friendship over the years as Jesse begins to break records at track meets. He's earns the title of the fastest man in world by the press.

While Jesse trains for the upcoming Olympics in Berlin, the world is watching the country as Hitler begins his reign of terror in Germany. The U.S. Olympic committee considers not participating due to the human rights violations and the pressures of the public. They send Avery Brundage (Jeremy Irons) to talk to the Germans whose Olympic committee is run by Joseph Goebbels (Barnaby Metschurat). Avery wants the Swastika removed from the streets and Olympic arena. The horrific treatment of the Jews to be out of sight and they can not restrict non-white athletes and Jews from competing. Goebbels had hired filmmaker Leni Riefenstahl (Carice van Houten) to film a propaganda documentary of the Olympics to the glory of the new Nazi Germany. Leni ends up including all of Owen's medal record wins over the German competitors. Despite the fame and honor of winning, Jesse is still treated poorly when he can't even attend a dinner in his honor by making him and his wife walk through the back door through the kitchens.

The Olympics are supposed to be about the athletes competing against the best from other countries, and politics be dammed. But Owens was pressured by the NAACP not to go to send a message about the Nazi's policies towards Jews and people of color. The choice he made sent a bigger message when he brought home a record four gold medals.
(Review by reesa)