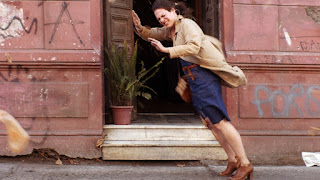 The Chilean film directed by Sebastián Lelio who wrote the script with Gonzalo Maza has garnered numerous awards and nominations around the world, including The Best Foreign Film at the Academy Awards. This is mostly due to the fierce and sensitive powerhouse performance by Daniela Vega as Marina Vidal. She dominates the film with a truly amazing portrayal of love, loss and discovery that will stay with you after the credits roll.

Marina is a night club singer in the evening and a waitress during the day. She is involved with Orlando (Francisco Reyes), who is about 30 years older. But they are totally enamored with each other and she just moved in with him. For her birthday, he promised her to take her on a trip to Iguazu Falls, but he may have left the tickets at the sauna. The beginning of the film embraces their free and non-judgmental relationship. After a night of celebrating, Orlando wakes up in the night saying he doesn't feel well before collapsing. Marina rushes him to the hospital but he doesn't make it. The doctors question her about her status to Orlando. Is she family? Is she his partner? Is her name a nickname? She calls Orlando's brother Gabo (Luis Gnecco) who tells her he will take care of everything. It would be awkward for the family if she is involved. Grief stricken she runs from the hospital only to have the police drag her back. Apparently they have some questions since Orlando was covered in bruises (he fell down the stairs). They demand her ID, and ask why she wants to be called Marina. A detective who specializes in sexual abuse contacts her wondering if there was something going on. She forces Marina to have a physical exam to check for anything untoward, but it's only humiliating. On top of all this, Orlando's ex-wife calls and wants Marina to drop off Orlando's car at her office. Meeting for the first time, Sonia (Aline Küppenheim), in a typical passive/aggressive move, understands her grief, and tells her don't worry about moving out of his apartment right away. Then tells her she cannot attend the wake or funeral because how it would look to their young daughter. Orlando's older son, Bruno (Nicolás Saavedra), makes it clear to Marina that she has to vacate ASAP and she can't keep Orlando's dog, that he had given her.

Rutter-less, Marina, goes to work in a fog. Orlando's family treats her like a freak. She is not allowed to mourn the loss of her lover, the one person who treated her like a human being. She tries to go to the funeral service, but is kicked out. She moves in with her sister and husband, who try to encourage Marina to let it go. Move on with life. But Marina needs closure. She finds the cemetery, and confronts the family by jumping on their car demanding them to return the dog. In the wake of Orlando's death, Marina struggles and endures the prejudice, and the resistance of being accepted in Chilean society. She turns to her mentor, her singing teacher, who encourages her to find her voice again.

It's truly about time that trans characters are played by actual trans actors. They should no longer be regulated to be sidekicks, secondary background, and the butt of jokes. The story makes one assess your attitude of a person's gender identity. The challenges that Marina faces are universal whether it be race, gender, or religion. In the end, you can only find strength in oneself, then ideally love and acceptance will follow.
(Review by reesa)

Email ThisBlogThis!Share to TwitterShare to FacebookShare to Pinterest
Labels: A Fantastic Woman review